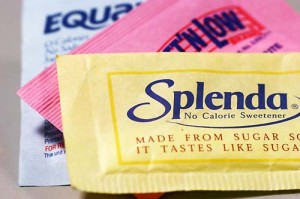 A food safety advocacy group has downgraded its rating for sucralose, the artificial sweetener better known as Splenda, from “safe” to “caution” in its chemical guide to food additives.

The Washington-based Center for Science in the Public Interest announced Wednesday that it had long rated sucralose as “safe” but is now categorizing it with a “caution,” pending peer review of an unpublished study by an independent Italian lab that found the sweetener caused leukemia in mice.

Previously, the only long-term animal-feeding studies were done by sucralose’s manufacturers, the CSPI said.

Other artificial sweeteners such as saccharin, aspartame and acesulfame potassium have received the center’s lowest rating, “avoid.”

Rebiana, a natural high-potency sweetener obtained from the plant stevia, is considered “safe” by the CSPI, though it says the sweetener needs better testing.

“Sucralose may prove to be safer than saccharin, aspartame, and acesulfame potassium, but the forthcoming Italian study warrants careful scrutiny before we can be confident that the sweetener is safe for use in food,” said CSPI Executive Director Michael F. Jacobson.

Despite concerns about artificial sweeteners, the CSPI says that drinking diet soda is better than sugar-carbonated soda, which it says “poses greater risks such as obesity, diabetes heart disease, gout and tooth decay.”

In order to avoid the risks of both sugars and non-caloric sweeteners, the CSPI is encouraging people to switch to water, seltzer water, flavored unsweetened waters, seltzer mixed with some fruit juice or unsweetened iced tea.