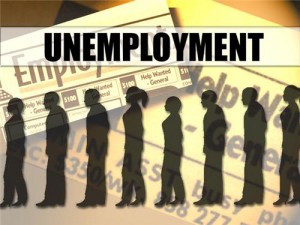 The number of first-time filers for unemployment insurance fell for a second straight week last week, but the level suggests that the labor market remains sluggish.

There were 472,000 initial jobless claims filed in the week ended Aug. 28, down 6,000 from an upwardly revised 478,000 the previous week, according to the Labor Department’s weekly report.

The 4-week moving average of initial claims — a number that tries to smooth out week-to-week volatility — was 485,500, down 2,500 from the previous week.

Claims have been stuck in the mid- to upper-400,000 range for about nine months, though last month they spiked above 500,000 for the first time since November, before edging lower again.

“This report is a step in the right direction, but this range is not where we want to stay,” said Robert Dye, senior economist at PNC Financial Services. “Labor market conditions are stabilizing, but we’re not generating as many jobs as we would like to since economic activity has stalled.”

Last week, the government said the economy sputtered to a near stop in the second quarter, growing at an annual rate of 1.6% during the period.

Dye expects economic growth to remain stagnant during the third quarter, but begin to pick up toward the end of the year and into 2011.