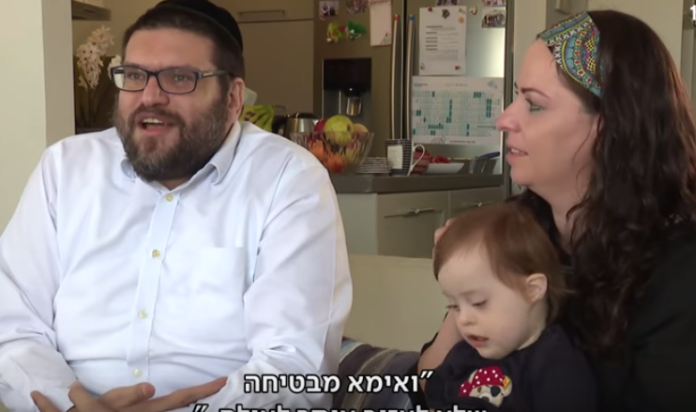 This is the story of a chareidi couple that fought for years, to bring children into the world. Finally, finally, it was understood that it is medically impossible to bring children into the world, leading them to look at the option of adoption. It is the emotional journey of the young couple who was given the gift to see past the difficulties into the neshama of a small child, who was later to become their daughter.

“When we told our parents we are looking into adopting a child with special needs, they said ‘fine but don’t expect us to be grandparents!”

Rivki adds, “For us it is very complicated, difficult, for it may even mean not attending a family simcha”.

Rivki told social workers that “I want a child that no one else wants!” They learned that many parents have abandoned their children with Downs Syndrome, “often because of the stigma associated with this” explains Yossi. The social worker explained “We will tell you which child you can adopt and not the other way around”.

One thing led to another and not only did they adopt a downs child, but they are now shluchim, having decided to undertake the battle to assist parents, to persuade them not to abandon children with downs.

“We work to persuade parents that they have the ability to raise the child themselves and they do not have to abandon him/her” Yossi adds.

Rivki goes on to explain that at one point she realized she is finally going to be a mother and it’s time to begin shopping, describing the moment and the feeling that her wait is ending. She then tells of the phone call from the social worker who explained “we are not good enough” as she puts it, “and at that moment I was shattered” she added, realizing once again she was not going to be a mother.

They explain a volunteer from Ezer Mizion approached them, telling them of a child “who is very sick and about to undergo serious heart surgery all alone, a child who was abandoned” as Rivki explains it.

Yossi then tells how he told welfare officials they found a child, but was told “we will tell you and not the other way around”. However, they were undeterred and the next day they arrived at the hospital but could not gain entry to the preemie ward. When asked “who are you” by the charge nurse, Rivki retorted “I am Tamar’s mother” and the door was opened. It was six in the morning and Tamar was in an incubator, weighing less than two kilograms, scheduled to be in surgery in an hour. “She was hooked up to many machines and we realized she is very cute and quite ill. They took her out of the incubator and she held her against her body and said “Tamar, Ima is here!’” Yossi details.

Rivki explains the forecast was not a good one, with doctors explaining she was not likely to ever walk. However, today, some three years after leaving the hospital, they meet with doctors and the nursing staff. Dr. Yotam Almagor shares his feelings, as he saw Tamar in the incubator all alone, without family, and how he was pained to see this until Rivki and Yossi arrived. Today, B’chasdei Hashem she is walking.

Yossi and Rivki have decided to make this their life mission and while Rivki explains “I want the next child” and I recommend this to anyone who cannot have their own children. When my father finally came and held Tamar, he broke down in tears and apologized for saying, ”How could I ever say this about her”. She adds that her father has Baruch Hashem some 150 offspring but Tamar remains special. Yossi adds this all makes them a better couple and closer to one another.