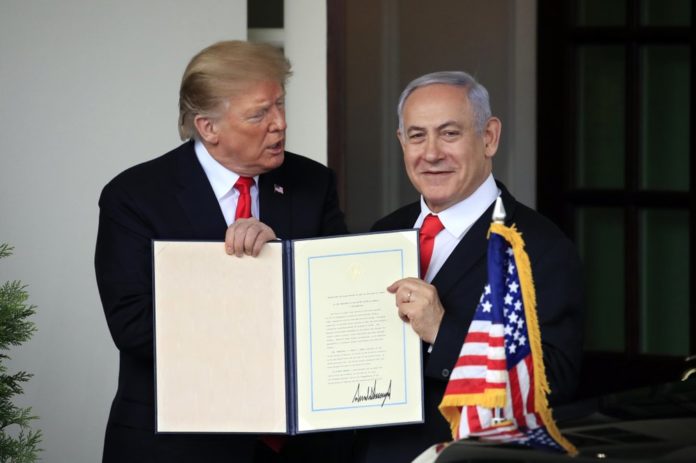 Iranians will “resist” the Trump administration’s acceptance of Israeli control over the occupied Golan Heights, Iran’s president said Friday, adding his voice to that of many Arab nations, including a number of U.S. allies, who have denounced the U.S. decision.

Hassan Rouhani said the U.S. move is “trampling on international regulations about the Golan.” Iranians, too, “should resist and that way gain victory” over the U.S. and Israel, he said.

Israel seized the Golan in the 1967 Mideast War after Syria used the strategic plateau to shell northern Israel for years.

Syria and many other Arab states heavily criticized Trump’s move.

The Saudi and Tunisian foreign ministers joined the outcry from Tunis, ahead of an Arab League summit in Tunisia’s capital on Sunday, where Arab leaders are set to discuss a resolution on the Golan.

Saudi Foreign Minister Ibrahim Assef said his country “categorically rejects” the U.S. decision on the Golan Heights. He called it a “vain attempt to impose a fait accompli” and warned that it would have “serious negative repercussions on security and stability for the region.”

Tunisian Foreign Minister Khemais Jhinaoui, whose country assumed the Arab League presidency this year from Saudi Arabia, called Trump’s proclamation a “void decision with no legal foundation,” adding, “we will work to fight against all the damage that could result from this.”

The Arab League secretary-general, Ahmed Abu Ghaith, called the U.S. decision “disappointing,” and warned that it would “encourage the occupation of territories by force and feed extremism.”

The speakers at the summit further pledged their support to the Palestinians’ pursuit of an independent state as part of a two-state solution.

Meanwhile, in Jordan thousands of demonstrators poured through the streets of the capital on Friday, holding anti-Israel signs and chanting slogans to protest the U.S. recognition of Israeli sovereignty.

Meeting in the Turkish Mediterranean coastal city of Antalya on Friday, the Turkish and Russian foreign ministers also denounced the decision.

Turkey’s top diplomat, Mevlut Cavusoglu, said the decision “does not add to the region’s peace and stability, on the contrary, it creates unrest and chaos in the region.”

He added: “It is out of the question for us to accept and recognize such a decision.”

Iranian Foreign Minister Mohammad Javad Zarif said Thursday the decision is a reminder to Arab and Muslim countries that U.S. and Israel “will steal your lands.”