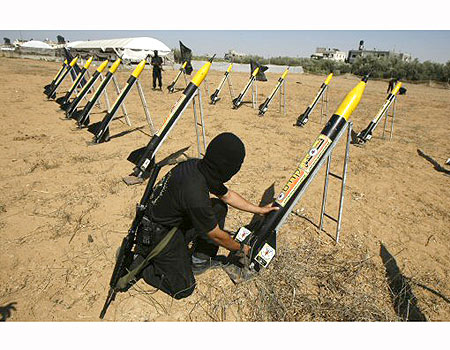 The rocket that caused significant damage to a Ashkelon school in the Shabbos rocket attack was 170mm, the first of its kind to be fired from Gaza. According to defense officials, the rocket was manufactured in Gaza.

The rocket carries at least 10kg of explosives, as compared to 3-4kg in the 120mm Katyusha that was fired to date. The reality of this increasingly powerful rocket signals a significant jump in the terror organization’s abilities to strike targets in southern Israel. The heavier rocket has a range between 14-16km (8.5 – 10 miles).

Ashkelon residents heard the powerful explosion at about 8:40am on Shabbos morning, stating that one would have a difficult time believing the army just completed a major offensive in Gaza. “The rockets are continuing as they did before the operation,” alarmed residents explain, calling on the army to take action to halt the attacks. A second Katyusha landed in an open area and did not cause damage. At least 10 people were taken to Barzilai Hospital for treatment of hysteria.

Five other rockets landed in open areas in the Eshkol, S’dot Dov and S’dot Negev Regional Councils. No injuries were reported.

Another Katyusha rocket landed in Ashkelon on Sunday morning, about the time the cabinet was convening for its weekly meeting, placing the renewed rocket attacks high on the agenda.