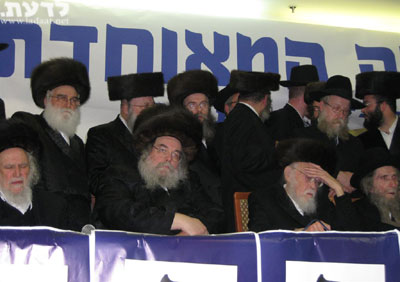 Perhaps Yahadut HaTorah waited a tad too long to sign a deal, now aware, the ‘day after’ that it has lost a significant amount of bargaining power with Labor on board, adding 13 seats to the coalition.

After Likud and Yisrael Beitenu signed a coalition agreement, which included relaxing certain restrictions for giyur under the state conversion program, Yahadut HaTorah felt compelled to bring the issue to Maran Rav Elyashiv Shlita, somewhat complicating advancing towards an agreement.

Yaakov Litzman of the Agudah faction on Tuesday expressed “disappointment” in Likud, accusing negotiators of being less than genuine and trustworthy, stating at present, the party’s inclusion in the government is not certain. He added he does not exactly understand how the coalition will operate with Barak and Lieberman holding senior posts.

Sephardic Chief Rabbi Shlomo Amar Shlita is also involved, working to speak with Shas leaders and others, seeing to find a common ground on the giyur issue that is satisfactory to all. On Tuesday, Degel HaTorah’s Moshe Gafne met with Rav Elyashiv, who is reportedly also seeking an acceptable compromise on the conversion issue.