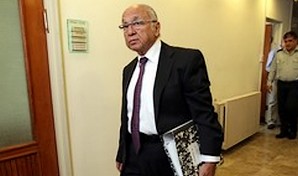 Justice Minister Prof. Yaakov Neeman was a most welcome guest at the Jerusalem kinos of rabbonim and dayanim who represent monetary courts. The minister, a frum Jew, spoke of an ideal, of introducing Torah law to replace Israel’s secular law, stating such a move would be welcome and beneficial. He spoke of returning to the “days of glory” during which halacha prevailed, calling for reinstating the heritage of our fathers in the State of Israel. He stressed that halacha provides a solution to all our problems, concluding one must daven to merit this speedily in our days.

Neeman, a professor of law and a senior member of Israel’s legal community, elicited the ire of many secularists, including Galei Tzahal (Army Radio) host Razi Barkai, who is a staunch supporter of the secular way of life, abusing his Tuesday morning program to ridicule the professor’s remarks, to totally invalidate the possibility of living under “oppressive halacha”, a move that he feels would propel the nation back to days that preceded our modern lifestyle, a situation that is unwanted by most.

Livni, An Expert on Halachic Law

Galei Tzahal (Army Radio) host Razi Barkai interviewed Kadima opposition party leader Tzipi Livni on Tuesday morning, asking her to comment on remarks from Justice Minister Prof. Yaakov Ne’eman, telling Galei Tzahal (Army Radio) “His statements should concern every citizen” and any effort to return us to Torah and halachic law must be concerned regarding the democratic values of the nation, especially women.

She spoke of those seeking to implement halacha as a way of life do not have a right to impose their will on others and such efforts will only increase infighting. Livni rejected any notion of entertaining the introduction of Torah Law into modern-day Israel, insisting there is no place, adding “relevant halacha” has been masterfully incorporated in the nation’s law books that govern the lives of the State of  Israel today, stating there is no room for entertaining a state run by Torah Law.