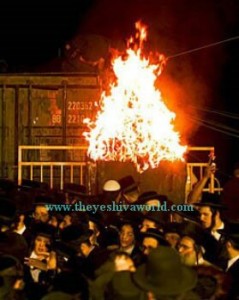 7:00AM IL: According to Israel Police officials in Meron on Sunday morning, since motzei shabbos, 280,000 have arrived in the area for Lag B’Omer festivities, expressing satisfaction with arrangements and the flow of traffic during the night.

Police report that the buses continue running without incident, and some 4,000 police troops remain deployed to ensure the day passes without incident. Police explain the main flow of visitors was during the predawn hours and they expressed satisfaction with operations.

Police warn motorists that the rain in Meron during the night and other areas has resulted in slippery road conditions in many areas, urging extreme caution. Police also urge those who remains awake during the night to please refrain from driving, suggesting they find a friend or sleep in their vehicle until such time they are alert enough to safely operate a vehicle.