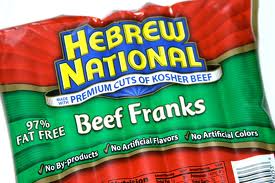 A lawsuit filed in May alleges that Hebrew National, the famous manufacturer of hot dogs and other products throughout the United States, is not living up to its self-proclaimed standard of kosher “as defined by the most stringent Jews who follow Orthodox Jewish Law.”

Hebrew National products are certified kosher by Triangle K, and a firm called AER provides the kosher slaughtering services at facilities in the Midwest, according to a class action complaint filed last month in the Dakota County district court of Minnesota.

The lawsuit filed against ConAgra Foods, doing business as Hebrew National, a Delaware corporation, alleges that employees of AER complained to their bosses that they witnessed procedures at slaughterhouses that “rendered the meat being processed not kosher.”

AER leased space from American Foods Group, LLC, which brought cattle to its facilities — including the Dakota Premium Foods plant in South St. Paul — “to be slaughtered, inspected and certified.”