The dream of Maran Sar HaTorah HGR’ Chaim Kanievsky shlit”a is being fulfilled:

Starting last year, 7000 children receive food cards every month, plus a voucher for chicken and meat.

For a full year, each week, the wonder recurs. Nobody knows. The world continues its business as usual. No one stops suddenly in the streets, stands amazed, and starts clapping. Discreetly, respectfully, seven thousand angels of mercy make their way – dispatching envelopes throughout Eretz Yisrael!!!

Inside these envelope rest slices of life. Folded-up loaves of bread. Fragrant chicken for Shabbos. 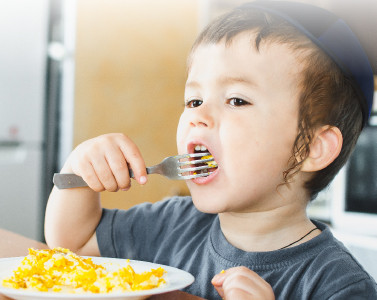 There are families who don’t have milk in their refrigerators, whose children have no bread for their lunch, because they simply cannot afford it. They are still waiting for more donations to come in to Kupat Ha’ir.  These are the families who received the envelopes this year. They, and their children. But for each child who receives a food card, nearly two others are still waiting!

Three Merits of Partnership in the Olelim Fund

1. A Certificate of Partnership in the Torah of Maran Sar HaTorah HGR’ Chaim Kanievsky Shlit”a

In this precious certificate, you acquire a partnership. You will be supporting a hungry child and ensuring that he will have a weekly food card for bread, milk, chicken, and fish, and in exchange Maran Sar HaTorah HGR’ Chaim Kanievsky Shlit”a is making a deal with you. It’s all official.

It’s a type of Yissachar/Zevulun arrangement. Maran Sar HaTorah HGR’ Chaim Kanievsky Shlit”a isn’t able to support all the poor children single-handedly. But you can support one child. One family. And therefore Maran is offering you a partnership with him, a portion in his Torah learning.  if you’ll support one hungry child, who can receive a food card regularly. Not for luxuries. Not to pay back Abba’s and Ima’s debts. Not for his medical expenses. And not for the rent. Just food for a child.

2. The Gadol HaDor will daven for you each Birkas haChodesh

Shabbos Mevorchim- the Shabbos that, through it, abundance for the entire month is channeled. The Gadol HaDor will say his Birkas HaChodesh. But the Bracha won’t be only for himself. He agrees to include you in it. He’ll bless you and yours. You agreed to this special request- to support a hungry child- a child whose parents don’t have enough money to support him- and from the moment you contributed Maran Sar HaTorah HGR’ Chaim Kanievsky Shlit”a includes you and your entire family in his Birkas haChodesh. His Tefillos will arise on your behalf. For an entire year!

3. The Historic Decree Of Abundant Parnosah

As if a Certificate of Partnership in the Torah of the Gadol HaDor wasn’t enough, and the Zechus to be included in the Birkas haChodesh of Maran Sar HaTorah HGR’ Chaim Kanievsky Shlit”a now Maran adds on and affixes his signature to an extraordinary decree:

“Whoever gives a significant sum to Kupat Ha’ir’s Olelim fund for families with hungry children, will merit Abundant Parnosah, Midda K’neged Midda. And all has been signed and confirmed.”

The goal of the “Olelim” fund is to provide $90 a month for each child, thus ensuring that each child has the bread, milk, and cheese that he needs.

At Kupat Ha’ir, we checked the particulars of the situation and found that we are dealing with about 13,000 children that lack this nutritional safety net, in light of the difficult economic situations of their families. 13,000 children times $90 a month, for a year, is the staggering sum of about 14 million dollars.

Join Maran HaGaon Rav Chaim Kanievsky Shlit”a and Kupat Ha’ir as we strive to reach this goal and ensure that NO CHILD REMAIN HUNGRY!

CLICK HERE AND BE A PARTNER IN THIS HISTORIC CAMPAIGN!!!