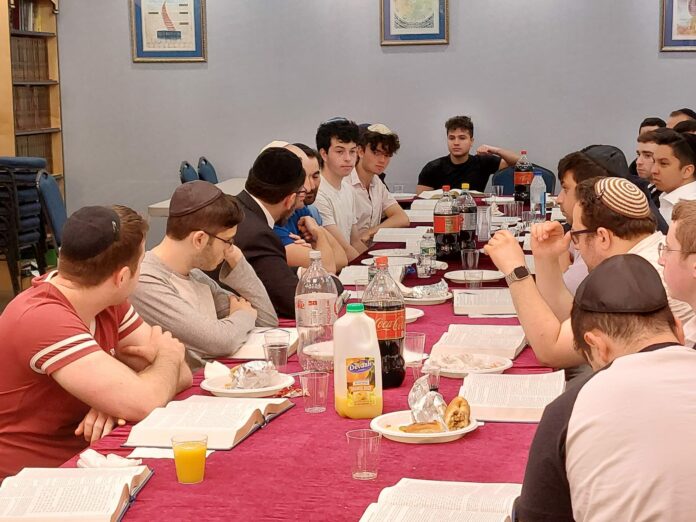 The annual Shavuos program at BJX (Brooklyn Jewish Xperience) was packed with Jews of every background. Standing room only.  The diversity and unity of the crowd was a true Kiddush Hashem. Jews at every stage and phase of Yiddishkeit were represented. Where else can you daven Vasikin with a public high school student who is observing his first Yom Tov, together with a young man from a frum family who is keeping his first Shavuos after years of being estranged?
“It was amazing,” said Michoel Pruzansky. “This was the most packed Shavuos program in Flatbush,” he shared.”It was very special,” said Meir Zanziper. “Being with such a diverse number of Yidden created an achdus that mirrored the one when we stood together at Har Sinai,” said Zanziper.
Michael, a college student who attended FDR public high school, recently began becoming observant at BJX. When he learned about the three day holiday, he was in a real bind. He works on Sundays and Mondays. How can he take off from work? He was torn. In the end, with great Mesiras Nefesh, he chose to take off from work and kept his very first Yom Tov. He said that not only did he not have any  regrets but that he loved every moment of the Shabbos and holiday surrounded by such warm and loving people and stimulating shiurim. It brought him to greater heights as a growing Jew.  “The speeches were very inspirational. They kept me going through the night,” said Michoel Pruzansky. Karen, who attended Murrow public school and had never kept Yom Tov before, wasn’t sure that she was capable of staying off her phone for such a long stretch of time. She said she was shocked that time flew by so quickly. Karen valued the ability to have deep and meaningful conversation at the meals, instead of just being plugged into social media for hours on end.

“I heard that BJX would be having an all-star lineup of speakers throughout the night. BJX delivered on their promise. The speakers were very powerful,” said Alan. “The speakers were dynamite,” shared Baruch Klien.

Please make a Yizkor donation to BJX in memory of your loved one. What better way to give an Aliyah to the Neshama of your parents or grandparents than to help BJX bring more Neshamos closer? Every Mitzvah that happens at BJX will allow the Neshama to ascend higher. Please donate at www.helpbjx.com.