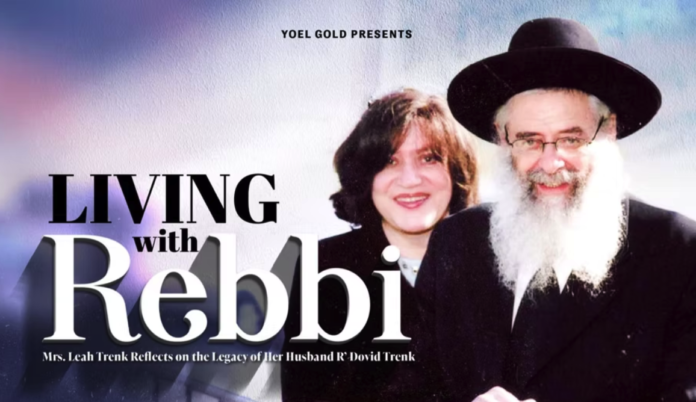 Rav Dovid Trenk zt”l had a special way of looking at people, believing in every individual with an unshakeable faith. It was with that conviction, accompanied by unbridled love and care, that he influenced anyone fortunate enough to enter his orbit.

And no one saw this more than his devoted wife, Rebbetzin Leah Trenk.

Rebbetzin Trenk watched for decades as her husband built people, infusing them with confidence and hope. She observed in amazement as he noticed the good in anyone and everyone, highlighting it and talking about it. His signature characteristic was ayin tovah. He had the ultimate good eye.

In Living With Rebbi, a brand new film presented by Yoel Gold, Rebbetzin Trenk takes us behind the scenes, giving us an inside look at her relationship with her husband, revealing how his eyes would sparkle when he’d meet a talmid, the unshakeable bond between them evident in every encounter.

This film is bursting with joy, positivity, and belief in every neshamah.

We see how, in this generation, there lived a malach, an angel in the guise of a man, who was persistent about the greatness he saw in people that they actually started to believe it in themselves.

The film will have us smiling and crying simultaneously as we are moved to our very core by a man who always sought to teach and influence the ones who society had shunned, the boys who no one else wanted. The more a talmid tested Rabbi Trenk, the more Rabbi Trenk doubled down on the love shown to that boy. “I am the luckiestrebbi,” he would say, “because I have the best boys.”

And he genuinely believed it.

Talmidim, to this day, “compete” for who their rebbi loved the most. They all claim to have been his favorite. And everyone has a story to prove it.

Because it was never about him.

It was about the message.

It was about the neshamah.

It was about his belief in the human spirit.

Watching this riveting new film, you will laugh, you will cry, and you will be uplifted and inspired. Masterfully and meticulously produced in time for his third yahrtzeit, you will get to see, through the eyes of his wife, the soul of the man who changed the way we look at others – and ourselves.

[CLICK HERE to buy the bestselling Rabbi Trenk biography, Just Love Them, that took the world by storm!]

Living with Rebbe: Mrs. Leah Trenk reflects on the legacy of her husband, R’ Dovid Trenk zt”l from Inside ArtScroll on Vimeo.