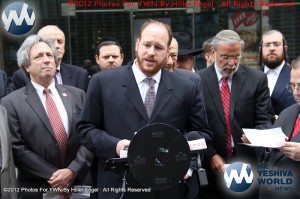 Mayor Ed Koch labeled divisive City Councilman Charles Barron as a “viper” and a “snake” who is an enemy to the State of Israel at a press conference outside the Museum of Jewish Heritage in Manhattan this morning organized by Councilman David G. Greenfield and attended by numerous elected officials and community leaders. Specifically, Mayor Koch and the rest of the speakers denounced Barron’s long track record of hateful rhetoric against people of various backgrounds and his antagonistic stance towards Israel.

Mayor Koch and Councilman Greenfield were joined by Congressman Jerrold Nadler, Assemblyman Dov Hikind, Assemblywoman Helene Weinstein, Assemblyman Steven Cymbrowitz, Councilman Mike Nelson and a number of community leaders to call attention to Barron’s divisive tactics and hate displayed towards many groups. Councilman Greenfield began by highlighting some of Barron’s most notorious and hateful comments, including his questioning of Israel’s right to exist, his comparisons of Gaza to concentration death camps, his proclamation in 2002 that he wanted to “slap the closest white person” and his labeling of Muammar Gaddafi and Robert Mugabe as heroes. The coalition of officials and community members also expressed concern for the role of this type of behavior in politics and the impact it can have on neighborhoods that become marginalized as a result.

“One thing about Charles Barron is, he can be very charming, but so can a snake. We have learned to live together in this city despite our different backgrounds, and his vile, vicious assailing of Israel is simply not acceptable. I can tell you this without hesitation because I know him,” said Mayor Koch.

“We can all agree that Charles Barron is a hate monger and an anti-Semite. A lot of people like to dismiss him as crazy, but this is someone who knows exactly what he is doing when he makes these incendiary remarks and has a very specific, hateful agenda. This is not an individual who is fit to hold any office in this land,” said Greenfield.

“We need representatives who will focus on uniting communities, not dividing them. Charles Barron’s support of dictators and terrorists such as Muammar Gaddafi, and support for delegitimizing Israel and comparing Israelis to Nazis is dangerous and abhorrent rhetoric that makes him unfit to serve in Congress,” said Nadler.

“It has been made very clear that Charles Barron is unrelentingly racist and hateful. From his rabid attacks on whites and refusal to salute the American flag to his endless rhetoric about Jews and Israel, Barron proves again and again that his is a voice of divisiveness, a dying breed that sane New Yorkers no longer care to hear from,” said Hikind.

“It is quite appropriate to be standing in front of the Museum of Jewish Heritage as a second generation Holocaust survivor. Charles Barron is saying that what my parents went through did not occur, and that the Holocaust did not occur. It is outrageous for anyone, especially an elected official here in America, to deny these events. He is someone who hates and is a disgrace to all elected officials,” said Cymbrowitz.

“Regardless of background, all residents should stand up, siding with truth and for right, and repudiate the hateful stances of Charles Barron,” said Weinstein.

“It’s time to move New York City forward together in a unified manner, and Charles Barron represents everything that is wrong with our society,” said Chaskel Bennett, a Flatbush community activist.

Led by Mayor Koch, today’s speakers were united in their call for the public to reject this toxic style of politics and to demand that all citizens are represented and respected on all levels of government. Many noted that the press conference’s location is a stark reminder of the danger of allowing this type of rhetoric and hate to continue unchecked in politics.