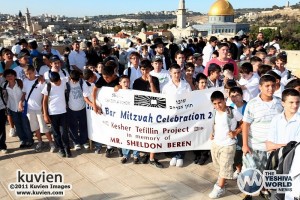 [VIDEO & PHOTOS IN EXTENDED ARTICLE] The Shuvu network of schools in Eretz Yisroel celebrated its annual communal Bar Mitzvah this week in Yerushalayim. 200 Shuvu boys from throughout the country participated in the festivities which began in Bayit Vegan with a farher in Gemorah and distribution of Tefillin (Shuvu’s Kesher Tefillin Project in memory of Mr. Sheldon Beren z”l). The boys were then zocheh to receive a Bracha from the great Posek, Mechaber of Shmiras Shabbos K’hilchasa, Harav Yeshaya Neuwirth Shlita.

The group then headed to the Kosel where they were joined by major longtime Shuvu supporter Mr. Dennis Berman from Baltimore, Shuvu Co-Chairman Mr. Abe Biderman and Mr. Aryeh Hoch, son of Co-Chairman Mr. Yossi Hoch.

The boy’s bar mitzvah was followed by the annual Bas Mitzvah for over 300 Shuvu girls, in Bnei Brak. The girls had the great zechus of having Rebbetzin Kanievski give them a Brocha, followed by warm words and Birkas Kohanim by Hagaon Harav Simcha Hakohen Kook Shlit”a, Chief Rabbi of Rechovot.

Click HERE to watch this video from a mobile device..