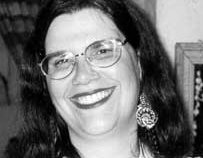 Beth David’s scholar-in-residence this spring will be Reb Mimi (Miriam Sarah) Feigelson, an unusual Orthodox rabbi. She considers herself a rabbi, but does not use the title. She did receive smicha (rabbinic ordination) from the famed Rabbi Shlomo Carlebach in 1994. But she kept it a secret from most people. A reporter from The Jewish Week in New York broke the news in December 2000. Feigelson lives within the Orthodox world and regards it as her spiritual community. Although she believes a woman can be a rabbi, her community does not agree. She has devoted her life to studying and teaching Torah, and believes in teaching to all who wish to learn, whether they are Orthodox or secular. For years she has led a Passover retreat in Dharamsala, India, where she engaged in interfaith dialogue as well.She will speak at Beth David March 24 to 26. All events are open to the public and free (except the Sunday Torah Fund fundraiser). Please check Beth David’s Web site for a detailed account of times and events. American-born Feigelson made aliyah with her family to Israel when she was eight years old, and lived there until accepting an appointment as lecturer of rabbinic studies at the (Conservative) Ziegler School of Rabbinic Studies at the University of Judaism in 2001.She holds a B.A. in history and special education and an M.A. in Jewish philosophy from Hebrew University in Jerusalem, and is now a Ph.D. candidate there. In addition she studied with the late Rabbi Shlomo Carlebach for 20 years. She did not have ordination in mind when she started studying with him, but after studying for so many years she felt that she was qualified for smicha, which he granted.Reb Feigelson’s teaching has taken her around the world, primarily Canada, England and the United States. Join us at Beth David for a unique and rich learning experience with Reb Mimi.