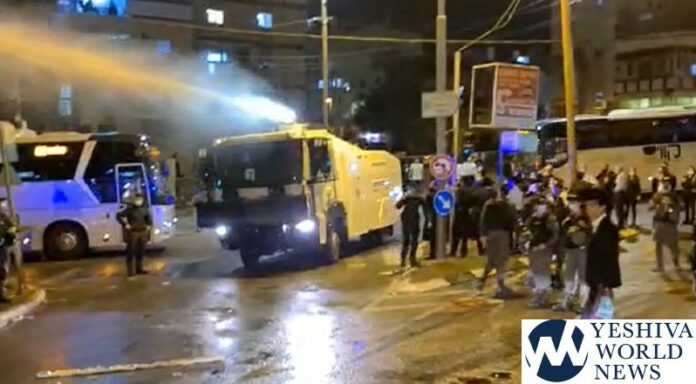 A large protest took place on Tuesday night in Jerusalem’s Bar Ilan intersection where Admorim and the head of the Eidah Chareidis, Hagaon HaRav Yitzchak Tuvia Weiss, were joined by hundreds of Charedim in protesting the construction of the Jerusalem Light-rail.

HaRav Weiss, who celebrated his 95th birthday on Tuesday, helped organize the protest, which turned violent as police fired founl-smelling water cannons on the crowds. One border police officer was lightly injured and required medical attention from Magen David Adom after she was hit in the face with pepper spray by one of the protesters. In addition to the Gavad, the Toldos Aharon Rebbe also joined the protest from his car.

The Eidah Charedis has previously decided to increase the number and the intensity of the protests against the construction of the light-rail through Chareidi neighborhoods in Jerusalem.