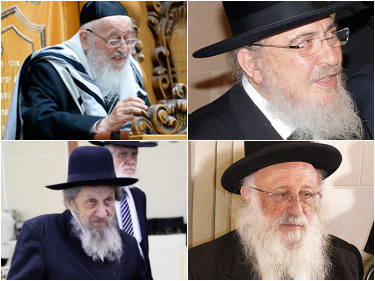 Six months ago, Rav Gershon Edelstein shlita added a number of Roshei Yeshiva to the leadership of the Moetzes.  This past Monday, Rav Gershon granted the title of Maran to four more Gedolim.  This author confirmed this with Rav Gershon’s Gabbai.  Apparently, it was in response to questions posed by Rav Nosson Zachofsky, the Rosh yeshiva of Gaon Yaakov (Rav Shteinman zatzal’s Yeshiva)and Rav Yoseph Efrati, Rav Elyashiv’s talmid and Gabbai, author of Yisah Yoseph.

It is (sadly) interesting to note that no Gedolei HaPoskim in Psak halacha – are now on the Moetzes or have been called Maran.

The four additional Gedolei Torah (in alphabetical order) all members of the Moetzes of Degel HaTorah, are:

All four are in their early nineties.  Rav Don Segal shlita and Rav Moshe Hirsch shlita are considered leading Gedolei Torah but are not yet in their nineties and Rav Gershon Edelstein did not include them, as yet, according to Rav Gershon’s gabbai.  Probably, the biggest Posaik HaDor now is Rav Moshe Shternbuch.