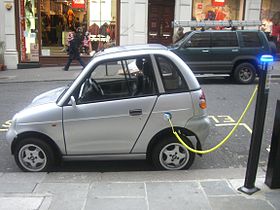 Honda announced Thursday that it’s slashing the monthly lease cost of its tiny Fit EV by one third, following similar moves by other automakers. Honda also is throwing in other goodies, such as a free home charging station and unlimited mileage.

Electric vehicles once were billed as the answer to high gas prices and dependence on foreign oil. But U.S. oil production is rising and gasoline supplies are abundant. Pump prices have remained relatively stable the past three years, while gas-powered cars have gotten more efficient, making consumers reluctant to give them up.

There’s also the worry that an electric car could run out of juice on longer trips.

As a result, electric car sales are only a tiny fraction of overall U.S. auto sales. Automakers sold just over 12,000 pure-electric vehicles in the U.S. through April, according to Ward’s AutoInfoBank and Tesla Motors. That’s less than 1 percent of the 4.97 million cars and trucks sold during the same period. Even a $7,500 tax credit from the U.S. government that effectively lowers prices couldn’t persuade most car buyers.

Automakers need to create a market for the cars among buyers who won’t ordinarily go for the latest technology, said Larry Dominique, a former Nissan Motor Co. product chief.

“The early adopters are kind of phased out of the EV market. To get that broader appeal to the EV, they’re doing some pretty aggressive lease deals,” said Dominique, now an executive with the TrueCar.com auto pricing website.

The sluggish sales have dampened high expectations for electric car use. President Barack Obama has said he wants to put 1 million plug-in electric vehicles on the road by 2015, but with two years left, the nation is far short of that goal.

Still, the cheap leases and a broader selection of models are giving electric vehicles a boost. Sales for the first four months of this year already are 80 percent of last year’s total sales of about 15,000.

The added models, though, have multiple automakers competing for a small number of buyers.

Automakers generally lose money on electric cars because the technology is so new and the batteries are costly. But they have been subsidizing sales by lowering prices. Chrysler CEO Sergio Marchionne said earlier this year that his company will lose $10,000 on every Fiat 500 electric vehicle it sells. Others have reported similar losses.

With the Fit EV, Honda is offering a $259 per month lease, down $130 from the initial $389 per month offer when the car went on sale in July of last year. The reduced price starts June 1 and will apply to existing Fit EV leases, Honda said. The three-year lease requires no money down and comes with unlimited mileage, free routine maintenance, collision insurance coverage and a free 240-volt home charging station, the company said Thursday. The charging station normally costs $995. The car buyer must take care of installation.

“Although we feel the Fit EV offers significant product benefits over other electric vehicles, in order to effectively compete in the EV market, we need a more competitive price,” Honda Motor Co. spokeswoman Robyn Eagles said in a statement.

Earlier this month, General Motors Co. said that it would lease the subcompact Spark EV for $199 per month with $999 due at signing as it goes on sale in California and Oregon. Nissan is offering a $199-per-month lease on its Leaf electric car with $1,999 down. That’s down from a high of $369 per month back in 2011.

Both the Spark and Leaf leases run for three years but have 12,000-mile annual limits on the number of miles one can drive without incurring mileage charges.

The lower lease prices put an electric car on par with a comparable small car. For instance, you can lease a gas-powered Fit for $169 per month for three years, with about $2,000 down. Automakers can offer the cheap lease deals on electric cars in part because they get the $7,500 tax credit.

The Fit EV can go 82 miles on a single charge and gets the equivalent of 118 miles per gallon of gasoline.

Honda rolled out the Fit EV last summer in California and Oregon. It now has 36 dealers trained to sell and service the cars in states including New York, New Jersey, Massachusetts, Maryland, Rhode Island and Connecticut. It plans to expand that network to more than 200 dealers by the end of June.