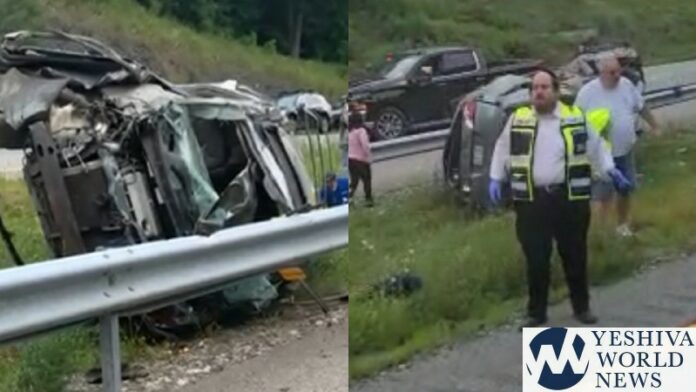 As YWN reported on Wednesday, a serious crash on Route 17 left two people dead. Today, the NY State Police has provided YWN with details of the crash.

On August 4, 2021 at approximately 7:10 p.m. the State Police responded to a fatal crash on State Route 17 eastbound at the Sands Road Overpass near exit 119 in the Town of Wallkill. The crash involved a 2005 Ford Escape operated by Anthony K. Jones, age 24 of Walden, NY and a 2004 Toyota Sienna, operated by Nelson Vivarcampoverde age 48 of Middletown, NY. Jones was traveling alone while Vivarcampoverde’s vehicle was occupied by 7 additional passengers.

The Toyota Sienna was traveling in the passing lane of State Route 17 parallel to the Ford Escape that was in the driving lane. The vehicles did collide causing the Ford Escape to leave the roadway, strike an earth embankment, and overturn. The Toyota Sienna entered the center median, struck the guiderail, and overturned before coming to rest on the westbound median.

The driver of Toyota Sienna, Nelson Vivarcampoverde, and passenger Maria Abrigo, age 36 also from Middletown, were ejected from the vehicle and pronounced deceased at the scene. Two additional passengers were flown from the scene to Westchester Medical Center due to the nature of their injuries. The remaining four passengers were transported by ambulance to Garnet Hospital with serious injury. The driver of the Ford Escape, Anthony Jones, was also transported to Garnet Hospital and treated for minor injuries. The cause of the crash remains under investigation.