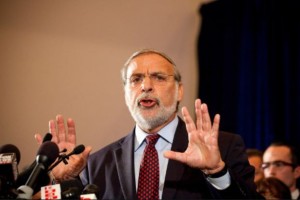 The proposed U.S. deal with Iran would give the largest terror state in the world the ability to create nuclear weapons. Consequently columnists, clergy, military experts and world leaders are all weighing in on the possibilities. Let there be no question: The range of potential scenarios differs greatly, depending upon your vantage point.

For instance, while Israel fears the possibility of a nuclear attack and the annihilation (G-d forbid) of millions of its citizens, the Saudis are more concerned that their rival in the most unstable region of the world will now be calling the shots. And what follows next is a nuclear arms race in the Middle East.

Some military experts say the U.S. is opening the door to Iran having nuclear weapons in the very near future, as little as three years. Other experts believe the future will arrive sooner than expected. Even Democrats in the U.S. Congress have broken ranks with President Obama denouncing this “peace in our time” deal as potentially tragic.

Only one leading voice has remained silent. Only one key U.S. leader has absented herself from the debate.

Regardless of whether President Obama is motivated by the need to leave a legacy (as if Obamacare wasn’t enough), guile and vindictiveness towards Israeli Prime Minister Netanyahu, or just an inability to see beyond his ego while slinking toward an immediate feel-good diplomacy that turns a blind eye to reality, the results are all painfully the same. A bad deal with Iran is a bad deal we will all come to deeply regret. Gallows humor brings the term seller’s remorse to mind, but it’s hardly applicable in the likely wake of millions of murdered human beings. Our sorrow will reach new depths that, having only unleashed two comparatively small atom bombs 70 years ago, we really cannot begin to fathom.

Nevertheless, Hillary Clinton has remained silent on this matter. Mrs. Clinton, the former the U.S. Secretary of State under President Obama, a leader whose experience clearly marks her as an expert on foreign affairs, has chosen, thus far, to sit this conversation out. Secretary of State Hillary Clinton, whose candidacy for the highest office in the land is all but guaranteed, a remarkable woman who takes a position on every other hot topic facing the American people, is conspicuously absent on this all-important issue.

Hillary Clinton, where are you hiding? And why? What can possibly be more important than this threat?

If elected President, Madame Secretary, you will inherit the nightmare that our current president is irresponsibly saddling our nation and the rest of the world with. You will preside over a United States as it stares down the barrel of a nuclear Iran that has, for decades, since the rise of the fanatical Ayatollahs, screamed the murderous threat “Death to America!” You, Mrs. Clinton, will find yourself in the unenviable position of Commander in Chief of the U.S. armed forces which have been targeted in the past by Iran and will be targeted again by this leading sponsor of world terrorism. Only now this same fanatical band of extremists will have THE BOMB.

How can you, Mrs. Clinton, at a time like this, stay silent?

If only we could rest assured that Iran’s promises to “destroy Israel” and its chants of “Death to America” were just campaign slogans. Alas, history has taught us that despots remain despots, that those who preach murder too often commit murder, and that all of us are unsafe while fanatics remain in power.

By virtue of your experience, your position, and your potential to lead our nation, your voice, Mrs. Clinton, should be heard everywhere and by everyone. And while your words may not stop this current out-of-control U.S. President from shoving his own personal agenda down the throat of a world that will pay dearly for this choice, it will certainly tell us who you are and how, given the opportunity, you plan to lead our country.