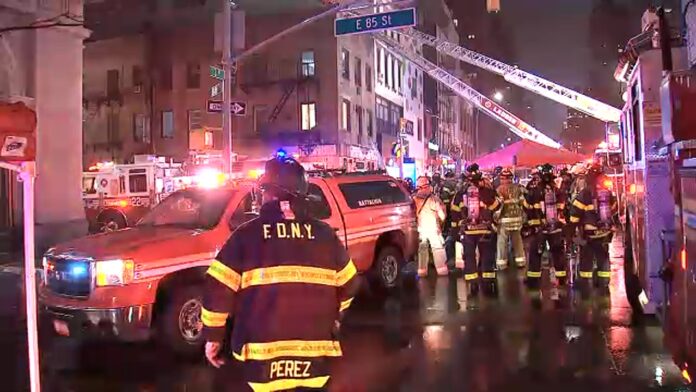 A fire erupted in an apartment building on Manhattan’s Upper East Side early Tuesday, injuring 22 people, two of them critically, according to the Fire Department of New York.

The fire was reported at around 2 a.m. on the 24th floor of a building on East 72nd Street.

A newborn baby was among those hurt, according to WABC.

The critically injured patients were found unresponsive in a doorway, where they appeared to have collapsed while trying to escape, WABC reported.

A door was left open in the apartment where the fire started, allowing the flames to spread into the hallway.

“We had numerous phone calls from apartments above, complaining about smoke, people trapped, all due to the fact that that door was left open,” said FDNY Assistant Chief Joseph Ferrante. “Had the door been closed, this would’ve been a one apartment, one room fire.”

Those hurt included four firefighters; their injuries were minor.

Investigators are trying to figure out what sparked a high-rise fire in Manhattan that left 22 people hurt early this morning; 18 were taken to the hospital for treatment, two are in critical condition and four refused treatment. #MorningsOn1 pic.twitter.com/4D2GXxG2IH