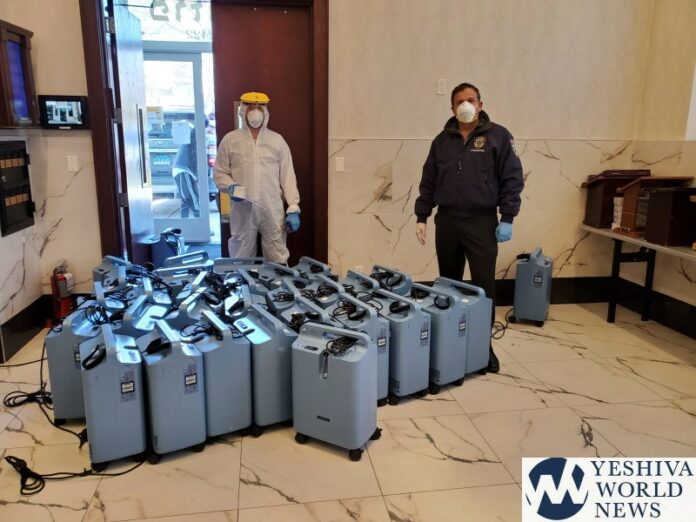 It was not lost on Shomrim members that their workload was considerably lighter than usual during the coronavirus outbreak while Hatzolah was being slammed with calls and hospitals were overburdened with patients. Trying to find a way to serve the community, Shomrim conferred with the medical community and realized that most people experiencing coronavirus-related breathing difficulties could avoid hospitalizations if they were properly oxygenated.

Hitting the phones, Shomrim was able to get approximately a dozen oxygen concentrators donated, but it was clear that significantly more were needed in order to combat the skyrocketing infection rates. More than 250 additional oxygen concentrators were purchased from various sources, the Jewish community at large responding enthusiastically to a Chesed Fund campaign to finance the machines, each of which comes with a not-insignificant $800 price tag.

Protocols were put in place to ensure that the equipment would be used properly and serve its intended purpose. Oxygen concentrators, as well as pulse oximeters to monitor heart rates, were loaned only to those with a prescription, while a group of doctors, physician assistants and nurses were recruited to stay in touch with participants on a daily basis. Frequent home visits were made to monitor patients’ progress, with reports given to their primary care doctors to ensure continuity of care. 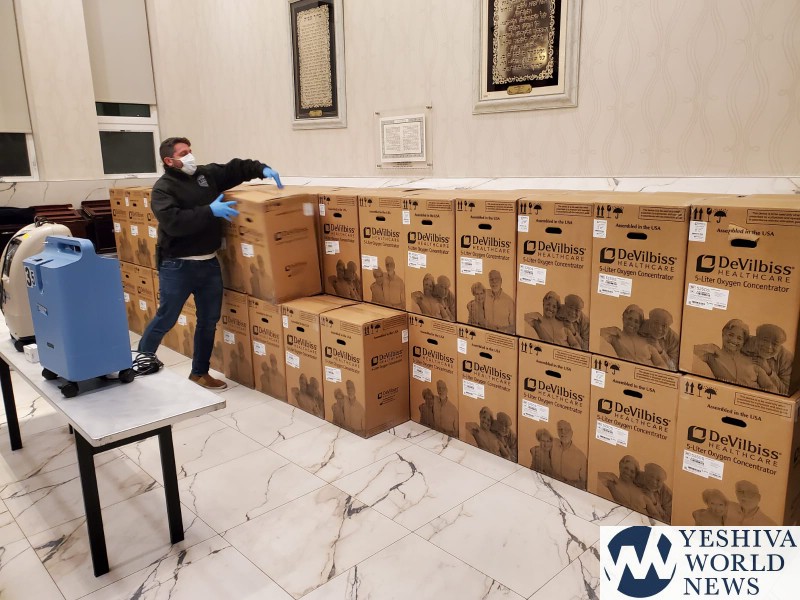 Shomrim coordinator Tzvi Weill estimated that more than 500 home visits were made by the group’s medical team over Pesach and that approximately 30 patients were able to return home on yom tov because they had oxygen concentrators in place.

“We were meeting ambulances at people’s homes and had doctors waiting most of the time at the scene for them,” said Weill.

Approximately 30 Shomrim members have been making deliveries to patients’ homes from temporary headquarters at the Pozna Shul on Avenue I and Bedford Avenue. Weill estimated that Shomrim’s 300 oxygen concentrators have kept hundreds out of the hospital and members have been fielding requests for other items as well. 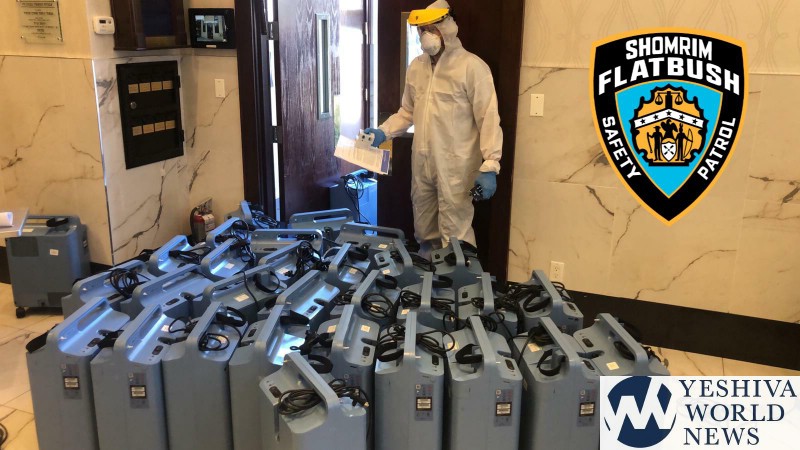 “We got one call on yom tov for someone who needed an oxygen concentrator, a pulse oximeter and a wheelchair, and our volunteers ran all over to make sure we were able to get everything they needed,” said Weill. “We also had a 24 year old coming home on Pesach after 10 days in the hospital and we arranged a full Pesach for him. Whatever we are being asked to do we just say ‘yes.’”

One member of Shomrim’s medical team is Dr. Shlomo Gensler of Israel who had been visiting New York with his family and was unable to return home for Pesach. Having Dr. Gensler on hand was particularly helpful on the eighth day of Pesach, the final day of yom tov for Americans but a regular day for Israelis.

“He worked straight through from 7 AM until midnight, non-stop in full HAZMAT gear, going from patient to patient,” said Weill. “It is a real bracha that he was here.”

Among the other volunteers who went above and beyond the call of duty were Avivit Mikhli and Chanie Schultz who worked around the clock and throughout yom tov to contact every patient, every day, and to schedule in home visits with the medical team. (The dedicated group of doctors, nurses and physician assistants was arranged l’iluy nishmas Ruchama Chaya Fruma bas Dov Pinchas.)

More than 2,000 people have called Shomrim with coronavirus-related inquiries over the last month. Some have been looking for information on coronavirus testing while others have just needed to talk, with social workers sent to caller’s home in some instances.

Shomrim was also responsible for arranging the mobile concerts that made their way through Flatbush on Sunday of Chol Hamoed, with Shloimy Daskal, Simcha Leiner, Shmueli Ungar and Beri Weber entertaining local residents and lightening the mood during what has been a difficult time for many. The project was sponsored by an anonymous individual in memory of Ruchama Chaya Fruma bas Dov Pinchas and Shomrim coordinated arrangements with the NYPD’s 61, 63, 66 and 70 precincts to ensure that the rolling concerts would proceed smoothly and safely. As per the NYPD’s directives, each of the four floats that drove through the area for five hours was preceded and followed by a car driven by a Shomrim member, with residents asked to stay on their porches as they enjoyed the free entertainment. A similar event took place on Tuesday afternoon in Flatbush’s Syrian community, once again sparking joy for local residents.

“On every block there were people outside smiling, dancing and saying thank you,” said Weill. “Yes, this is a sad time, but people had the opportunity to let their emotions out and it was wonderful to bring some real simcha into people’s lives during this difficult period.” 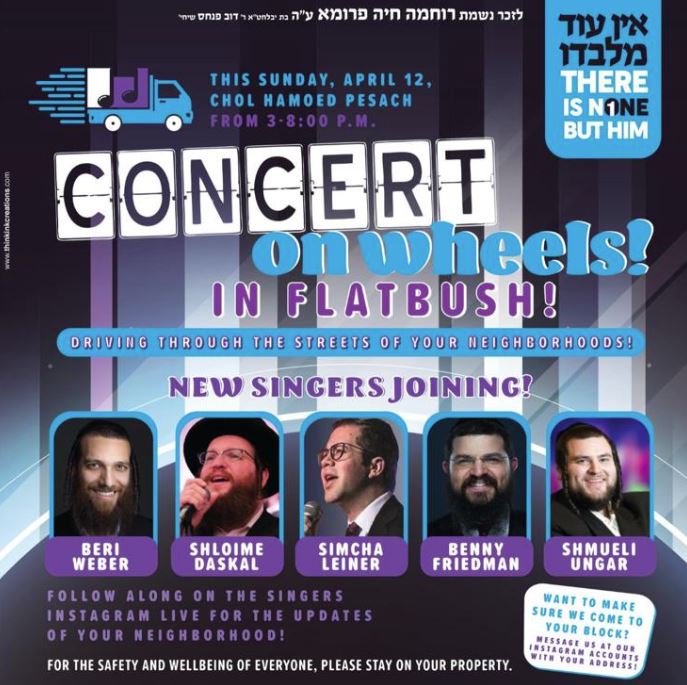 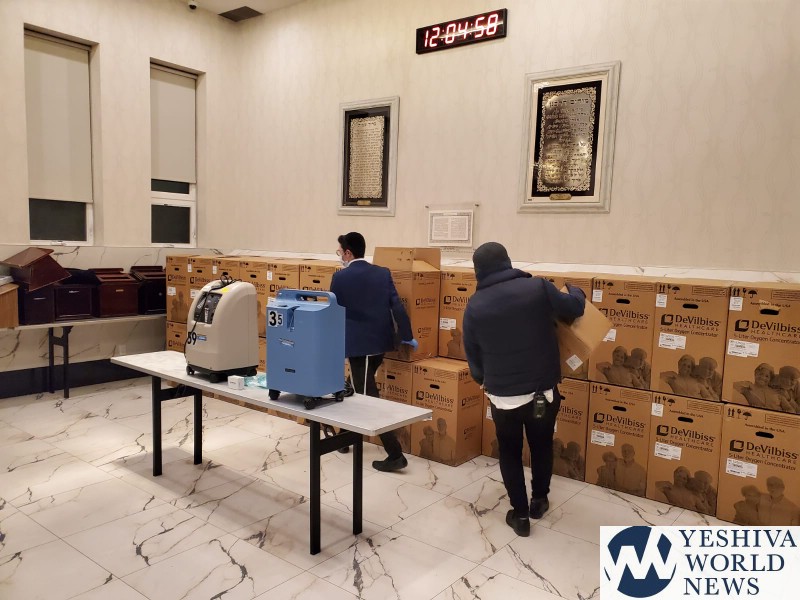 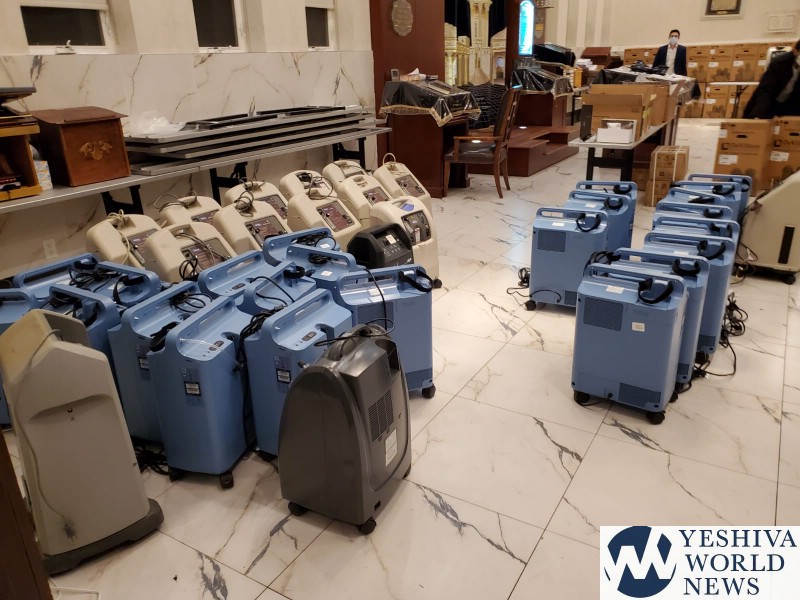 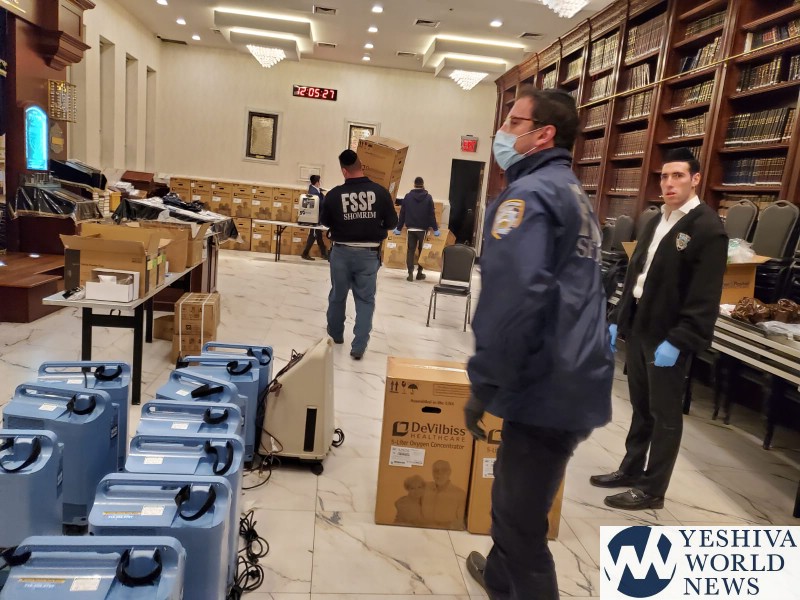 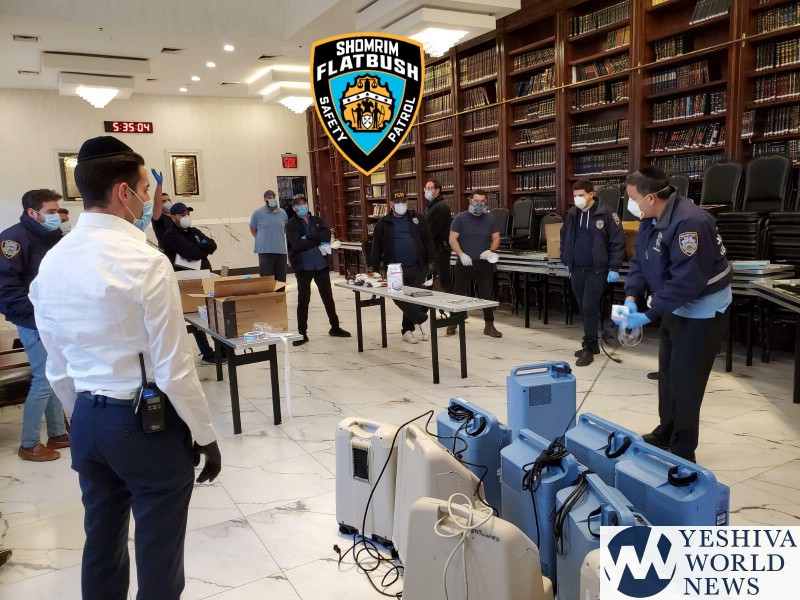 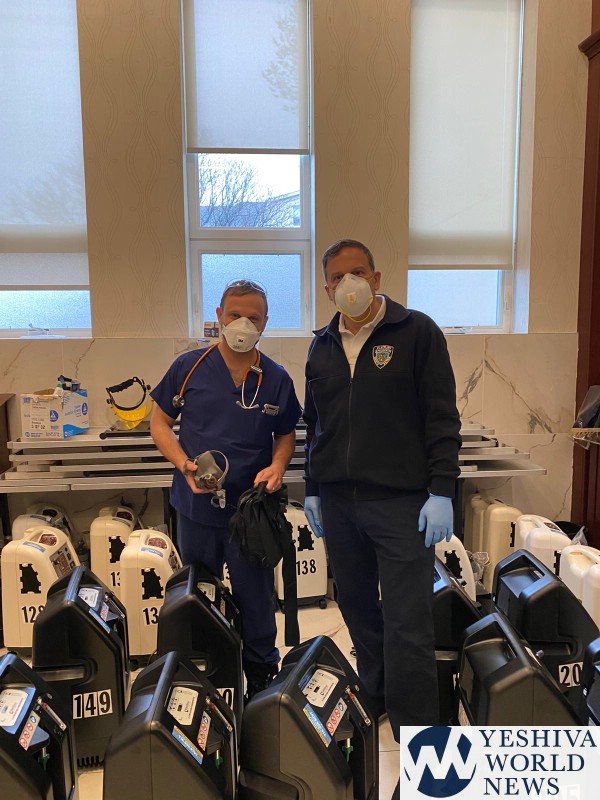 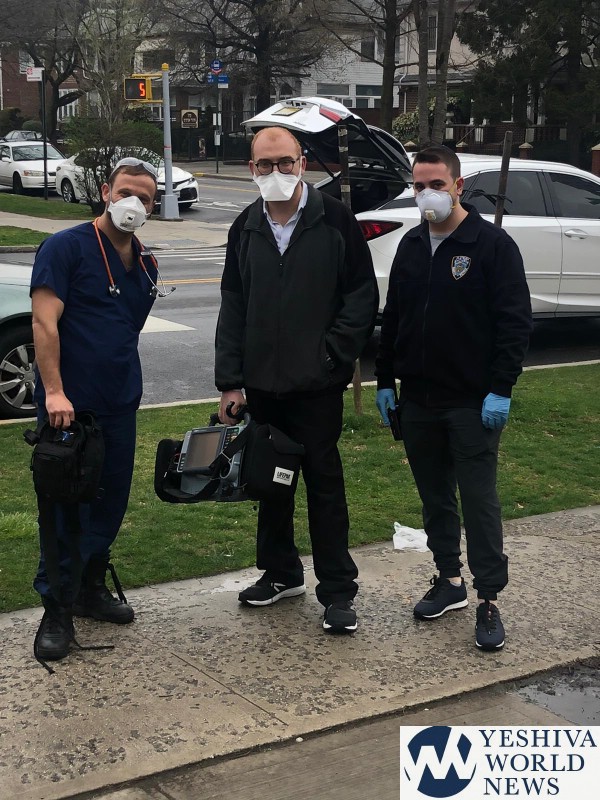