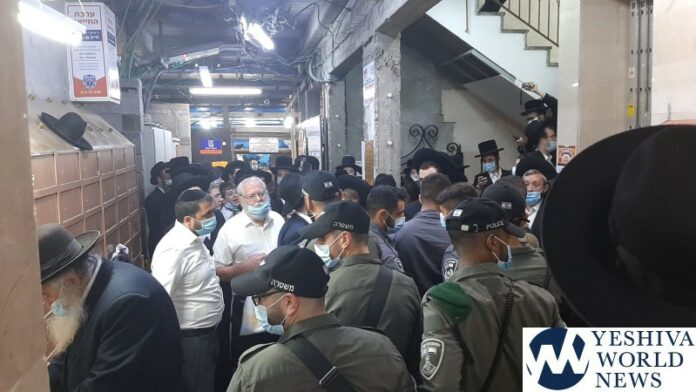 A large number of police forces stormed the Itzkowitz Shul in the center of Bnei Brak on Tuesday due to the claim that there was a large number of people gathering inside in direct violation of the Coronavirus restrictions issued by the government.

Sources from the Shul said that they were complying with the restrictions and that there was no need for the police action.

A spokesperson for the police said: “Officers saw a shul which claimed to be closed, but under a close investigation found that there were dozens of people gathering inside in violation of the restrictions. This gathering endangered their own health and the health of others. The officers demanded that the group disperse at once.”

A protest broke out and hundreds of people thronged to the site and surrounded the officers. “A handful of outlaws gathered to disturb the peace at the scene and threw projectiles including rocks at the officers and at a police vehicle.”

Officers then began issuing fines for 5,000 NIS and took enforcement measures to disperse the crowd.

Rabbi Yitzchak Sheinin, the Gabbai of the Itzkowitz Shul told Kikar Shabbos that “A lot of people are bored during this time of Corona and simply call the police and say, ‘Go take a look at what is happening at Itzkowitz,’ and then start a mob scene. The problem is that in the shul we are adhering to the restrictions. Whoever doesn’t follow the guidelines is kicked out.”