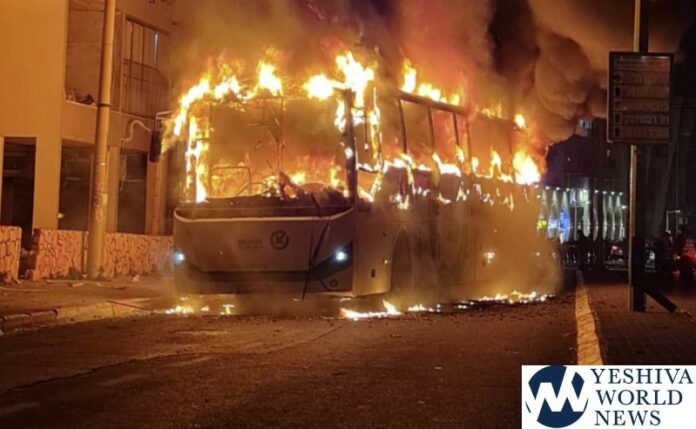 Violence in Bnei Brak reached a new level late Sunday night, as violent Hafganos took place around the city, and a group that locals have decided to label “CHARIEID ANTIFA” are causing destruction around the city.

At one location, protesters stopped a bus on Kahneman Street, attacked the driver, forced him off, and literally set the bus on fire.

Local residents began to scream to the residents in the nearby buildings to evacuate, as the heat of the fire began melting the windows.

People began calling the fire department, but they refused to respond until they received a police escort – due to the fact that they are repeatedly attacked by Chareidi extremists when responding to Chareidi neighborhoods. They eventually responded – after more than 30 minutes – and extinguished the blaze.

A group of locals went to the local Fire Department Headquarters and literally banged on the doors.

A recording is attached of a person calling the fire department as well.

Local residents told YWN that there are hundreds of boys roaming the streets since all Yeshivas are closed, and are literally terrorizing the entire city – which is prompting a forceful response from police.

The bus fire was just one items of violence by this marauding gang of “Chareidi ANTIFA”.

Rubenstein managed to get into his car, which was then attacked by the mob, as they smashed his mirrors and caused other damage.

Police were investigating all incidents, and a wave arrests can be expected.