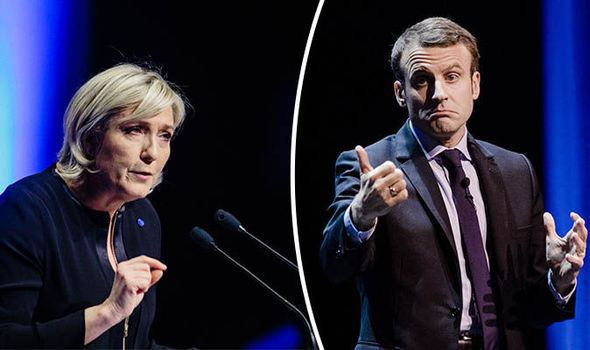 Speaking during their only one-on-one debate Wednesday, Le Pen told her rival: “I hope we won’t find out you have an offshore account in the Bahamas.”

She appeared to be referencing two sets of apparent forgeries, published a couple of hours before Wednesday’s heated showdown, that purported to show that Macron was somehow involved with a Caribbean bank and a firm based on the island of Nevis.

Le Pen quickly backed away from the suggestion as the rumors were debunked the next day. The documents are obvious fakes: the “M” in Macron’s purported signature didn’t match his genuine sign-off, and whoever wrote the documents appeared confused as to whether the firm in question was a limited company or a limited liability corporation. Metadata embedded in the document suggest it was created just before being posted online — undermining the anonymous poster’s claim to have circulated the documents to “hundreds of French journalists” who had “all sat on this.”

Asked Thursday on BFM TV whether she was formally accusing Macron of having a secret offshore account, Le Pen said: “Not at all. If I wanted to do so I would have done it yesterday. I’ve just asked him the question. If I had proof, I would have claimed it yesterday.”

“All this is factually inaccurate,” Macron said.

Le Pen and Macron face off in the presidential runoff Sunday. The latest opinion polls show the pro-EU Macron holding a strong lead over his far-right rival ahead of Sunday’s vote.

The election has been shot through with fears by some that outside forces would somehow interfere. Despite slim evidence supporting such claims, French commentators have become highly sensitive to rumors and conspiracies and the networks that disseminate them.

The provenance of the latest conspiracy theory isn’t clear, but there are hints tying the faked documents to far-right circles in California.

One of the documents, for example, purports to have been drawn up under the laws of Nevis but actually draws some of its language from a guide to forming limited liability companies in California. The documents first appeared on Mixtape, a relatively new northern California-based file sharing service. And the Macron campaign identified the first tweet referring to the documents as coming from the Twitter account of Nathan Damigo, a far-right activist and convicted felon also based out of northern California.

Damigo recently won a measure of social media notoriety for punching a female anti-fascist militant in the face at a protest in Berkeley and had recently promoted French far-right content online.

French media unanimously criticized the poor quality of the only face-to-face televised debate between the two contenders. Le Pen got most of the blame for dragging the conversation down and opting for aggression from the start. She defended her aggressive stance on Thursday, saying a “severe” tone was required because “what is at stake is essential.”