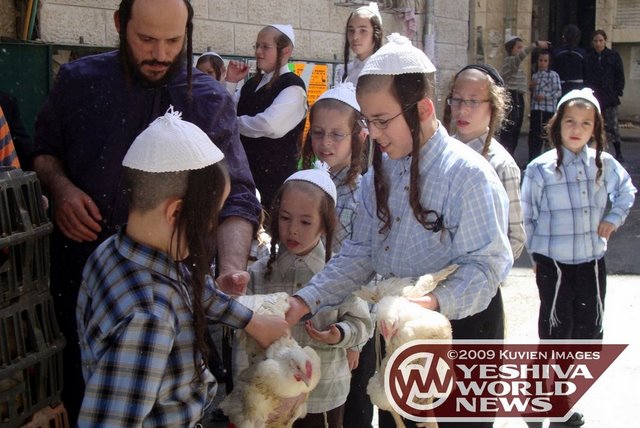 On Wednesday night, PETA members were loudly conducting a protest at the Skver Kapores Center in Boro-Park, claiming “mistreatment” of 60,000 “innocent” chickens.

PETA is a very powerful media-supported international group of “humane animal lovers,” whose ideology can be traced to the notorious Charles Darwin, the man who preached that Mankind is descended from the animals-that animals are indeed our “cousins.”

The German Nazi theoreticians were inspired by Darwin, and the leading German biologist, Dr. Ernst Haeckel, preached that some people-mental defectives, the disabled, Jews-are Mindervert,–unworthy of life. Acting on that vicious ideology, the Nazis murdered millions of innocent men, women, and children in the gas chambers and crematoriums of Auschwitz, while, at the same time, hugging and kissing their dogs.

I approached the PETA protest leader, a Jewish woman, wearing a black tee-shirt imprinted with the slogan Tzaar Baalei Chaim, and asked her what her group was so angry about. She answered that she had come to protect the chickens—to stop the chicken “Holocaust.”

I pointed out that Jews are the most humane people in the world—Rachamonim B’nei Rachamonim— and there’s nothing wrong with eating chickens. Well, answered this PETA Talmid Chochom, Adam was a vegetarian, and he was forbidden to eat any animals at all, including chickens. At that, her friend said: “Let’s leave and stop debating their silly religion!”

Throughout the long history of our people, Blood Libels have been instigated by vicious anti-Semites to demonize Jews and provoke pogroms. The Nazi newspaper Der Sturmer routinely featured headlines proclaiming that Der Yuden Zenen Unzer Umglick!—The Jews are Our Misfortune!

The PETA rank and file are useful idiots, advancing the agenda of their insane leaders. PETA’s most recent “accomplishment” was destroying Sholom Mordechai Rubashkin, CEO of the largest kosher shechita in the world, influencing Federal prosecutors to send him to jail for 27 years on trumped-up charges.

PETA leaders scrupulously avoid protests at Planned Parenthood abortion centers, where over 50 million babies have been murdered thus far in cold blood, and their body parts sold for cash—a true Holocaust. The Federal Government awards Planned Parenthood over 300 million of our tax dollars each year. The failure of PETA to organize even a single protest against this ongoing Government-sanctioned mass murder clearly demonstrates that their real agenda has nothing to do with compassion!