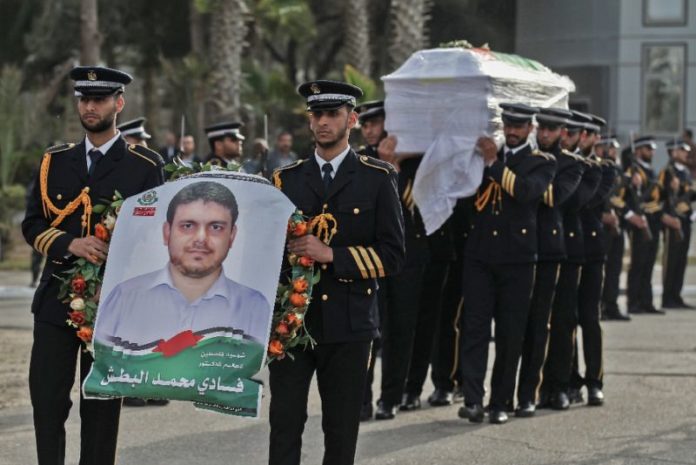 The body of a Hamas scientist who was gunned down in Malaysia last week was returned to the Gaza Strip on Thursday for burial.

Relatives, Hamas leaders and other political faction chiefs greeted the body of Fadi al-Batsh as it entered Gaza through Egypt.

Al-Batsh’s family said he would be buried later on Thursday, after Hamas officials had earlier said they would hold a large public funeral on Friday. It was not immediately clear why the timing of the funeral was changed.

Al-Batsh, a lecturer in electrical engineering at a Malaysian university, was killed by a pair of assailants on a motorcycle as he was walking to pray at a mosque on Saturday. Hamas has accused Israel’s Mossad spy agency of being behind the killing.

“You are returning back to us … paving the way for our return to Palestine,” said Khalil al-Hayya, a top Hamas leader, at a small ceremony at the border crossing. The coffin lay on a table, wrapped in a Palestinian flag.

“To the occupation, we say the debt to us has become heavy,” he said. “The day of punishment is coming.”

Hamas has identified al-Batch as a commander in its military wing, but said little else about his activities. Israeli media have reported that he was involved in Hamas’ military drone program.

Israel has a long history of assassinating wanted terrorists, though it rarely acknowledges responsibility. But in a published interview Thursday, Israeli Defense Minister Avigdor Lieberman said Israel did not do it.

“We did not assassinate him,” Lieberman told the Arabic news site Elaph. When asked who killed al-Batsh, the minister said: “Ask James Bond … maybe James Bond killed him like in the movies.”