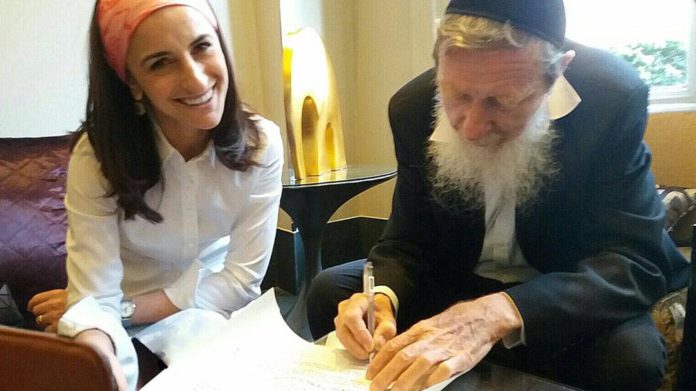 Rabbi Sperber, is a British-Israeli Rabbi who is best known for being the Rabbi of the Menachem Zion Shul in the Rovah in the Old-City of Jerusalem. Rabbi Sperber is also a professor of Talmud in Bar-Ilan University.

Brawer, who is originally Italian, comes from Moroccan heritage and will be taking the title of Rabbi. Many of the graduates from the “Maharat program” in which Brawer studied have chosen other titles to avoid conflict with more conservative elements within the Orthodox community. Her official graduation from the Maharat program will take place in Riverdale, at the Hebrew Institute of Riverdale in June. She has served as Rabbinic Intern this past year in the Netivot Shalom Shul in Teaneck, New Jersey. Brawer is also the founder of the British branch of the Jewish Orthodox Feminist Alliance (JOFA).

“I will describe myself as a rabbi, that’s what I’ve trained to do and that’s what I’m qualified to serve as,” she said in an interview with Britain’s Jewish News website.

“I wanted to be a role model to women and girls in the community, to show this is not something only possible as a man, but definitely possible as a woman and something women should aspire to,” she said in the interview. “Young girls should become anything they want. You can be well-educated, you can get a Ph.D. in any topic, but when it comes to Jewish studies and religious studies, there’s a limitation. Well, there’s definitely no limitation.”

Brawer, who was raised in a Chabad family and community, is married to Rabbi Naftali Brawer. The couple announced that they intend to move to the United States permanently in the near future. They have already confirmed positions to work as executive directors of the Hillel at Tufts University, in Medford, Massachusetts.