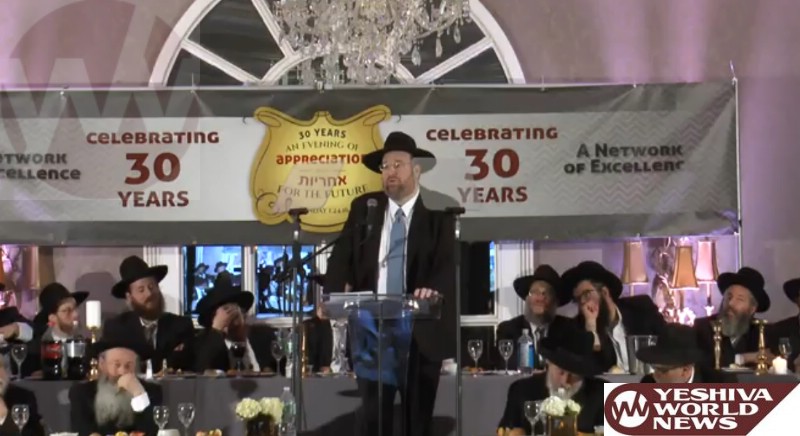 It was two and a half years ago when Shlomo Yehuda Rechnitz addressed a dinner in Lakewood and gave a speech that no one was expecting.

“L’tzaareynu harav, we have a machala in Lakewood,” said Rechnitz. “No other out of town community would ever allow a child to be left without a school. In LA if a child wouldn’t have a school , the first day the whole community would be all over it. The same thing would happen in Baltimore, Chicago, Toronto or anywhere else. This is basically a Lakewood machala. Yes, there a few kids in Monsey, more than a few kids in Brooklyn, but nowhere else and at no other time in history was this problem close to the magnitude it is in Lakewood.”

Rechnitz ultimately retracted his words and the firestorm that shook Lakewood to its core slowly settled down with everyone saying that, Baruch Hashem, the situation had changed.

Just four months later, my wife and I moved with our two daughters, then ages three and one, to Lakewood. Priced out of the housing market in Crown Heights, we did our homework before making the move, choosing Lakewood because of the affordable housing and the many amenities that it offered, moving our well known, New York based CJ Studios photography business with us. While it was true that the Lubavitch presence in Lakewood was not overly large, we found our place in a community and a shul where we felt at home, and we settled into a more relaxed pace, confident that we had made the decision that was best for our family.

Allow me to tell you a little about my family. I am from Denver while my wife hails from Miami. We are your average frum family. We are makpid on pas yisroel, cholov yisroel and I take both my davening and my learning seriously. It never once occurred to us that finding a school for our kids could prove to be a challenge.

We couldn’t have been more wrong.

We were somewhat discouraged when we first began looking for a school for our older daughter, hoping to find an appropriate place where she could learn and grow. We had been warned in advance that elementary school placements could be difficult, so we started looking for a four year old preschool program in order to get a foot in the door at an early age so that we wouldn’t have a problem down the road. Unfortunately, we struck out everywhere we went, told time and time again that the schools were full, so with no other option we put her into playgroup for four year olds and took comfort in the words of consolation from our friends who told us that we would get her in the following year. “Don’t worry about it,” they told us. “The 4 year old preschools can be harder to get into than the older grades.” “They only take families with kids already in the school.” “Just do to a playgroup this year and things will fall into place next year.”

We hit the ground running when the next school year started but by December we were already discouraged because no matter how many applications and deposits we sent out, the rejections kept on coming. We kept hearing the same words: “our school is filled to capacity” and “our classes are bursting at the seams.” Some schools wouldn’t even take our application because they literally had no room and a few that supposedly still had room they treated us very poorly, though I will spare you the details to avoid embarrassing them. We thought our worries were over when we were finally accepted at a school in February, after a very nice hour-long sit down meeting with the menaheles, but they retracted their acceptance a week later, telling us our daughter wouldn’t be “a good fit because she was too well mannered for the kids in their school” and assuring us that they would help us find another school. “It has nothing to do with being Lubavitch,” she said to us, hastily adding “I love Lubavtich people.” Ask yourself if we were black if she would have dared say the same thing to us. And as far as I know, they never lifted a finger to help us and we never heard from them again.

Believe it or not, we had even tried to start a school of our own, hoping that we could be part of the solution to Lakewood’s school crunch. We met with a few local families and others but couldn’t get the necessary commitments and since we were already busy with our full time business that often has serious time demands, we knew we couldn’t take this on on our own. It was clear to us that we had to stick to existing schools and daven for siyata dishmaya.

An ad placed around town by the Lakewood Vaad in February offering to help parents whose kids still didn’t have a school was another dead end; while they seemed well meaning and said all the right things, that was as far as their efforts went. Our hopes were dashed again in June when we had an extremely positive interview at yet another school but then didn’t hear back from them for weeks. When I finally reached them, they told us they had been ready to accept our daughter until something came up, refusing to tell me what the issue was. The mystery was solved a few days later when a rov I know called to tell me that the school was unhappy with my business’s Instagram page that featured pictures of brides, and after being told that I was a wedding photographer, they reluctantly agreed that I might be frum enough to send my kids to their school. They said they would call us back for another meeting in a few days but that was weeks ago and I am still waiting for that call to come through. Ironically, this particular principal had told us that she was from California and didn’t have the stereotypical “Lakewood” mindset, but her actions clearly proved otherwise.

For the life of me, I can’t figure out how is it possible that a wedding photographer can’t post his work on Instagram, even though apparently it’s ok for a frum man to run a lingerie store in the middle of Boro Park. Can someone please explain that to me? I run an honest business together with my wife, we provide people with treasured photographs of the most important day in their lives. Have we come to the point where we need to have wedding pictures without kallahs in them? Or is someone out there suggesting that if I take pictures at a more modern wedding then clearly my daughters will never be good frum girls?

Meanwhile, yet another promising lead at a small school evaporated just days after our registration was sent in. We got the following email from the school in late June that read “Thank you for your interest in our school. Unfortunately, the school will not be continuing in September, so please pursue whatever other options you have for your daughter.” Other options? We had no other options. And worse yet, dozens of parents now found themselves on board the same sinking ship that we were on.

Our only option left so far is to put our daughter in a van with local Chabad shluchim and have her driven 70 minutes each way to a Chabad school located in New Brunswick. I simply cannot come to terms with the fact that we live in an “Ir HaTorah” with dozens of schools and yet not a single one will take our child. And it isn’t just my family and my daughter – I have spoken to numerous people who have the same problem, and while some are finding themselves suddenly facing the possibility of homeschooling, quite a few of them are seriously contemplating enrolling their kids in public school simply because they have no other option. Is that what things have come to? Beautiful, yiddishe families putting their kids in public school because the existing yeshivos simply have no space?

As the product of Lubavitcher yeshivos, I was raised on stories of the previous Rebbe who risked his own life to send melamdim out to teach in underground Russian yeshivos in the 1920s and 1930s. They defied the authorities daily, despite the possible consequences because they knew that they had to keep yiddishkeit alive by educating the next generation and every time a melamed was captured, there were others ready to take his place, placing themselves in jeopardy to keep the flame of Torah burning bright. Yet here we are in America, the land of the free, living in Lakewood where there are over 60 elementary schools, where no one has to risk their life to teach, where countless teachers can’t even find jobs and we still have children near the end of July who don’t have a school to go to in September.

We all need to wake up and realize that Lakewood’s growth is unsustainable. We can’t keep building and building and building and growing a community without proper infrastructure in place. Yes, we have kosher supermarkets, and pizza shops and shuls and mikvaos and clothing stores selling the finest in designer clothes for kids of all ages, including babies. Is that where our priorities lie? In making sure our babies are dressed in Burberry? But what good is any of that if we aren’t able to provide our precious children with appropriate chinuch? Rumor has it that both Bingo and Pomegranate are opening up locations in Lakewood. I hate to be the one to burst anyone’s bubble but we don’t need another place to buy overpriced dips, $200 roasts or two gallon jugs of mayonnaise. What we need is more schools!!

Baruch Hashem, every Jewish child and every yiddishe family is a bracha and a cause for celebration, but the irresponsible development of Lakewood, which seems to include everything except for ample educational opportunities for our beautiful children, has created an untenable situation. Anyone who is contemplating a move to Lakewood needs to be aware of the realities – you might have all of the conveniences you want here, but as things stand right now, don’t assume that you will be educate your child anywhere in the greater Lakewood area. Not until opening more schools becomes more real then more grocery stores.

While he may have retracted his statements, Shlomo Yehuda Rechintz had it right when he said, “Who has the right, who has that G-d like complex, that feels they have the right to inflict such irreparable tzaar? If you are ready to take the achrayus, then stand up now. Amod, Amod.”

Thank you, Mr. Rechnitz. I can only hope that others heed your call.