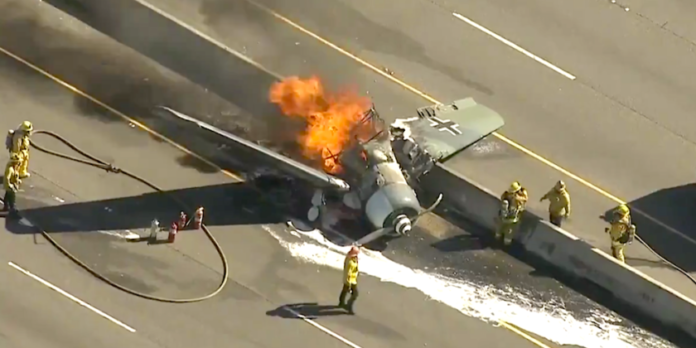 A pilot escaped injury after his vintage single-engine plane crashed and burst into flames on a Southern California freeway Tuesday, authorities said.

The plane struck the center divider of U.S. 101 and the pilot, the only occupant, was safely removed before flames consumed much of the aircraft, the Los Angeles County Fire Department said.

No vehicles on the ground were involved in the afternoon crash that snarled traffic about 30 miles (50 kilometers) west of downtown Los Angeles.

The North American AT-6 belonged to the Condor Squadron, a group that performs mock dogfights for air shows and flies in formation over parades, memorial services and events commemorating veterans, said president Chris Rushing.

“The pilot did a great job getting it down and not hitting any cars,” he said.

Miraculously, No Reports of Injuries or Vehicles Damaged

The pilot, whose name was not immediately released and flies professionally for Alaska Airlines, was out on a training exercise, Rushing said. He didn’t know what caused the crash.

The AT-6 was developed in the 1930s and used as a training aircraft by U.S. pilots during World War II.