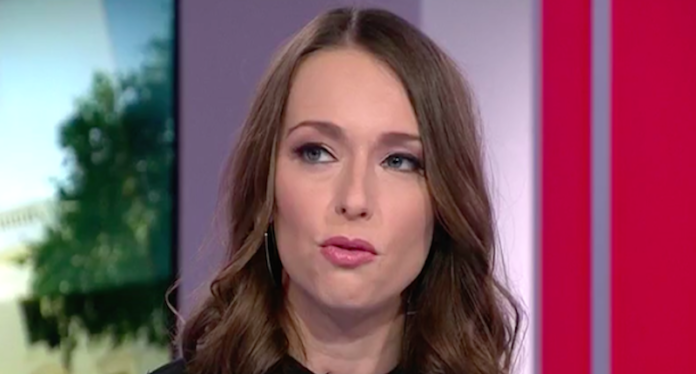 A CNN panel went off-the-rails after one of the contributors argued that President Donald Trump has “radicalized more people than ISIS.”

Julia Ioffe, a self-identified “American Jew”, was quick to blame Trump for the Pittsburgh synagogue massacre and continued that theme on CNN on Monday:

“I think this president, one of the things that he really launched his presidential run on is talking about Islamic radicalization,” Ioffe said. “And this president has radicalized so many more people than ISIS ever did.”

“That’s just unconscionable for you to say that,” said conservative panelist David Urban.

Ioffe initially stood by her point.

“The way he winks and nods to these groups,” Ioffe said. “The way he says, ‘I know I’m not supposed to say it, but I’m a nationalist.’ The way that he hems and haws when he has to condemn these people and kind of, gritting his teeth, says, ‘Fine, okay, I condemn this.’”

Far-left writer Julia Ioffe, who blamed Trump and Glenn Beck for the synagogue shooting, claims that Trump has “radicalized so more people than ISIS ever did.”

CNN’s @JakeTapper just sits there and does absolutely nothing.pic.twitter.com/Sfh9ZbhvPP

In the immediate hours after the shooting attack Shabbos morning that left 11 Jews dead, Ioffe was quick to blame Trump moving the Israeli embassy to Jerusalem for the attack:

Later in the show, Ioffe apologized for her comment.

“I think this has been an emotional and personal painful time for me,” she said. “I think I exaggerated and I apologize for that.”

CNN’s Jake Tapper runs interference for far-left writer Julia Ioffe, claims the Republican National Committee (RNC) pounced on her blatantly false comments that Trump has “radicalized so more people than ISIS ever did.”

I will add, though, that it is not a coincidence that the number of anti-Semitic attacks has jumped nearly 60% in 2017—the biggest one-year increase in recent history—while this administration has systematically pulled back resources from countering domestic extremism.

On Monday night, President Donald Trump slammed Ioffe for her outrageous remarks, telling Laura Ingraham that Ioffe “must be some kind of a sick woman.”

Trump weighs in on far-left writer Julia Ioffe after her comments today on CNN, says, “Well that must be some kind of a sick woman.”

Ioffe, who did not receive any pushback from CNN’s Jake Tapper, said that Trump has “radicalized so many more people than ISIS ever did.” pic.twitter.com/0tHW2fR3FG

Ioffe continued her outrageous statements in another appearance on CNN on Monday night:

CNN continues to promote far-left writer Julia Ioffe after she lied on CNN earlier today, saying that Trump has “radicalized so many more people than ISIS ever did.”

She made multiple false claims during the segment tonight without any pushback from CNN (THREAD): pic.twitter.com/SCqnp7AW9u

Ioffe claims that purchasing an AR-15 is just as easy as buying a “pack of cigarettes.”

This is not even remotely true.

Rasmussen, which is one of the most accurate polling firms in existence, released a new poll today that showed Trump’s approval is 50%, and an all-time high with blacks.https://t.co/7C33d3N1oQ

Trump has repeatedly said that he is referring to “the fake news media” and *not* the “media” pic.twitter.com/rrPwPsmO0o

Trump said: “And you had people — and I’m not talking about the neo-Nazis and the white nationalists — because they should be condemned totally” pic.twitter.com/0Hruf3avff