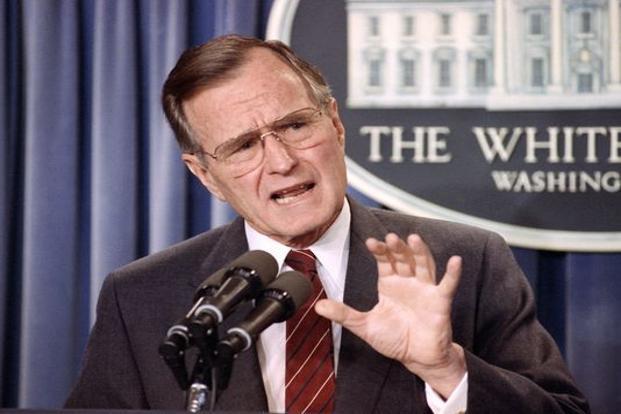 George Bush was a man with a matchless resume — combat pilot, diplomat, vice president, then president of the United States — but great communicator was not on the list. That was Ronald Reagan.

“Fluency in English is not something I’m often accused of,” he once said, demonstrating the point.

Nor was he given to the grand designs he once dismissed as “the vision thing.” He was a pragmatist, no showman. That was a style that worked for a term but not when he sought a second, losing, he thought, because he wasn’t “a good enough communicator.”

George Bush – the H.W. came into use later when his son George W. Bush became president – began his presidency in 1989 with a guarded declaration of independence. Guarded because conservatives never had been Bush fans and were determined to keep Republicans on the Reagan track. Independent because Bush did not want his administration seen as Reagan revisited.

“There’s going to be change, but hopefully a building on what’s happened,” Bush said in an AP interview before his 1989 inauguration. “I’m the one calling the shots. I’m the one who’s going to set the agenda.”

He had overcome the political detractors who called him a wimp, a Reagan lapdog, all resume and no action.

In 1966, Bush won the first of two terms in the House from Houston, and from the start his political ideology was hard to define. He considered himself a centrist; Texas Democratic foes called him a right winger. He supported civil rights legislation despite opposition at home. Once a supporter of abortion rights, he became an ardent foe. He later said his views had evolved.

That seemed the case on more than one issue, fodder for his critics when he got into national politics in 1980 after a succession of appointed jobs: ambassador to the United Nations, chairman of the Republican National Committee, envoy to China, director of the Central Intelligence Agency.

He was the reliable loyalist, defending and deferring to the leaders who chose him. As party chairman, he echoed Richard Nixon’s Watergate denials almost to the end.

The loyalty instinct was part of Bush’s Republican establishment heritage. He was the son of Prescott Bush, who served as senator from Connecticut. In the post-World War II era, centrist eastern Republicans dominated party councils. It was a system of trust in which custom counted and rules were unspoken but understood.

When Bush ran for president in 1980, he was in a field of seven Republicans led by Reagan. That’s when he dismissed Reagan’s budget notions as “voodoo economics,” a line he would regret when as vice president he wound up defending the same program.

Bush narrowly upset Reagan in the Iowa caucuses in 1980. He claimed campaign momentum, “Big Mo” as he put it. Not for long. Reagan trounced Bush in the New Hampshire primary and easily won the nomination.

Two terms later, it was Bush’s turn. Nominated to succeed Reagan, he spoke of a kinder, gentler nation — and then balanced the soft words with hard ones, in the phrase that became a trademark until he erased it. “Read my lips,” he said. “No new taxes.”

While Bush would one day write that he had no use for cutthroat politics, his 1988 campaign certainly fit the description. He did not deal with what he wanted to do as president but with the undoing of Democrat Michael Dukakis. Bush questioned Dukakis’ commitment to the Pledge of Allegiance, denounced his Massachusetts policy on prison furloughs, called him an emotionless ice man beholden to liberal interest groups, blamed him for the pollution of Boston Harbor. The campaign was so negative and irrelevant that Richard M. Nixon and Barry Goldwater publicly told Bush he should deal with real issues.

No matter. Bush won easily. But he was a president without a blueprint, and within weeks of taking office he had to deny that his administration was drifting without clear purpose. He had to deal with the costly savings and loan crisis and bailout. The national debt had tripled since 1980, in part because of Reagan’s tax cuts and increased military spending.

Stuck for answers, Bush reread his lips and agreed in June 1990 to “tax revenue increases” in a budget deal with congressional Democrats to curb spending and raise taxes. He knew the political risk, writing in his diary that it “could mean a one-term presidency but it’s that important to the country.”

But conservative outrage over the tax reversal was submerged in a foreign crisis that fall after Saddam Hussein’s Iraq invaded Kuwait. Bush always said he preferred dealing with foreign policy to coping with Congress in domestic affairs, and this was his kind of issue. He put together an unprecedented international coalition, sent American forces to the Middle East, and waged the Persian Gulf War that forced Iraq out of Kuwait early in 1991. It was over quickly, a U.S. victory Bush, in retirement, described “a signature historic event.”

But Saddam Hussein held power and Bush later acknowledged that he had miscalculated by expecting a regime change in Baghdad. That would not come until 2003, in the Iraq war launched by his son, President George W. Bush. Another son, Jeb Bush, made an unsuccessful run for the Republican presidential nomination in 2016.

With his 1991 war victory, the elder Bush’s approval ratings soared to record highs. But while he was winning abroad, the economy had slumped into recession at home. Bush didn’t seem to notice, and he would pay for that. Statistically, by 1992 the recession was over, but it didn’t feel that way to many Americans still facing economic woes.

“I know times are tough,” Bush said in New Hampshire. “I’ve known the economy is in free fall. I hope I’ve known it. Maybe I haven’t conveyed it as well as I should.”

The communication problem again. And it got no better when his aides gave him a cue card to remind him to tell voters how much he cared about their problem. Instead, he read them the card. “Message: I care.”

The hard-line negative campaigner of 1988 seemed distant and aloof in 1992. In a campaign debate, a woman asked how the national debt had personally affected each candidate: Bush, Ross Perot and Bill Clinton. A confusing question, since the debt does not affect individuals personally, but the other candidates figured out answers. Bush stumbled, taking the question literally and talking about interest rates. He rambled a bit, then said: “I’m not sure I get it. Help me with the question.”

Minutes later when the camera panned the stage, Bush was glancing at his watch, an everyday reflex but one that fed the opposition image of a bored, disinterested candidate.

The Democrats never let up. Bush was the candidate who didn’t get it.

Clinton did, and beat him. Even so, when Bush left office, the polls showed that well over half the country approved the man, even though they had spurned the president.

Perhaps that had something to do with an attitude he did succeed in communicating:

“Don’t confuse being soft with seeing the other guy’s point of view.”