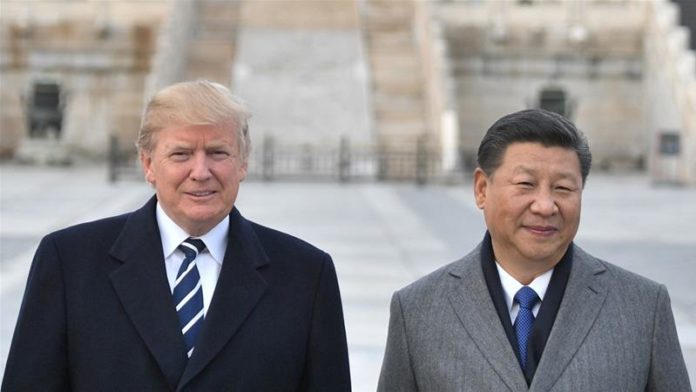 President Donald Trump and Chinese President Xi Jinping meet Saturday for some dinner diplomacy on the sidelines of the Group of 20 summit in Argentina. The US-China trade war tops their agenda, but the two leaders also have other topics they hope to tackle, including Taiwan, the South China Sea and Americans being detained in China.

A look at what each side wants:

The United States and China have both raised tariffs on hundreds of billions of dollars of each other’s goods in what is quickly becoming a perilous trade war.

The president, who expects concessions from Xi, has repeatedly lamented America’s gaping trade deficit with China, which amounted to $336 billion last year. To retaliate, Trump hiked tariffs over complaints that Beijing steals or pressures companies to hand over technology in violation of its market-opening obligations.

The president, who celebrates U.S. economic gains as a positive benchmark of his own performance, can ill afford a slowdown or recession heading into his re-election effort in 2020. At the same time, the self-professed expert dealmaker can hardly be seen caving to Chinese intransigence.

“I think we’re very close to doing something with China, but I don’t know that I want to do it, because what we have right now is billions and billions of dollars coming into the United States in the form of tariffs or taxes,” Trump told reporters before he left Thursday for the summit.

Adding to the tensions is a new report from the U.S. trade representative that accused Beijing of stepping up efforts to steal technology. China rejected the charges as “new unwarranted accusations.” Trump also has threatened that an even larger set of U.S. duties affecting China will go into effect in the New Year.

Besides trade, tensions between the two nations have been high regarding China’s claim to sovereignty over virtually the entire South China Sea. The U.S. challenges that claim and has vowed to maintain a presence in the waters to promote freedom of navigation and overflight.

On another issue, Trump said Thursday he will bring up with Xi the case of an American woman and her two grown children who are suspected of being held in China to force their estranged father to return to China to face fraud charges. John Bolton, national security adviser, tweeted a story in The New York Times about the plight of Victor and Cynthia Liu and their mother, Sandra Han, writing: “These Americans need to be allowed to return home.”

Xi will be hoping for progress toward a cease fire in the bitter trade war with the U.S. But while Xi portrays China as force for peace and free trade, he also needs to appear tough against the U.S. to maintain his standing among nationalists at home.

The U.S. has imposed punitive tariffs on $250 billion in Chinese exports and has threatened to double that unless China offers concessions on trade and investment policies the U.S. regards as unfair.

China has responded with tariffs on $110 billion in U.S. goods, but Chinese officials say they still aren’t clear what exactly the U.S. wants from it and Xi will likely attempt to gain more clarity and possibly put forward new proposals.

While Beijing has offered to purchase more U.S. products to narrow the massive trade deficit, Trump’s administration rejected that outright. The U.S. wants China to abandon demands that American and other foreign companies hand over key technologies in exchange for access to the Chinese market.

China denies making unreasonable demands and remains committed to becoming a global competitor in cutting-edge technologies such as robotics, artificial intelligence and biotechnology by 2025.

At the very least, the talks could serve as a stalling tactic to buy China more time and delay additional tariffs. Xi’s administration also hopes talks will exclude or sideline key trade hawks, such as Trump adviser Peter Navarro.

On Taiwan, Xi wants to make Trump understand how seriously China feels about the self-governing island and that closer engagement between Taipei and Washington threatens to destabilize the region — and possibly even spark a conflict.

In talks earlier this month setting the stage for the Xi-Trump meeting, a top Chinese foreign policy adviser had sharp words for the U.S. side over Washington’s increased support for the island, which China claims as its own territory.

China demands the U.S. cancel a $330 million sale of spare parts and related support for Taiwan’s U.S.-made F-16 fighter jets and other military aircraft. While Washington has no official relations with Taiwan, it is legally obligated to ensure it has the means to defend itself.

Trump’s administration has also approved official contacts with Taiwan at higher levels than before and recently opened a gleaming new representative office in Taipei.