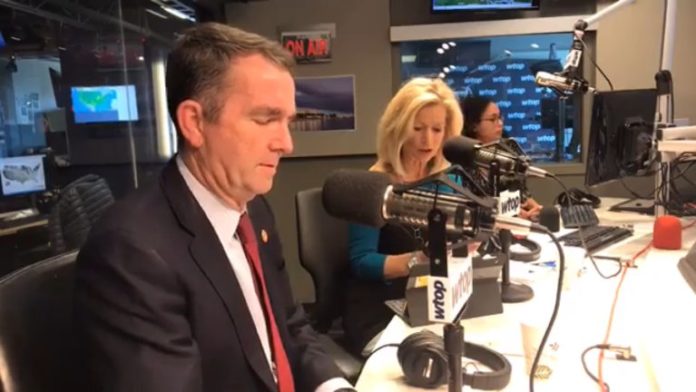 A push by Virginia Democrats to loosen restrictions on late-term abortions is erupting into a fierce partisan clash because of a viral video in which a lawmaker acknowledges her legislation would allow abortions up until moments before birth.

Gov. Ralph Northam (D) added gas to the fire Wednesday by describing a hypothetical situation in a radio interview where a newborn infant who is severely deformed or deemed “unable to survive” could be left to die. That prompted accusations from prominent Republicans that he supports infanticide.

Tran: “Mr. Chairman, that would be a decision that the doctor, the physician, and the woman would make at that point.”

Gilbert: “I understand that. I’m asking if your bill allows that.”

Tran: “My bill would allow that, yes.”

“I think this was really blown out of proportion.”

Democrats said their views were being deliberately mischaracterized by the GOP for political gain.

“Republicans in Virginia and across the country are trying to play politics with women’s health, and that is exactly why these decisions belong between a woman and her physician, not legislators, most of whom are men,” Northam spokeswoman Ofirah Yheskel said in a statement.

Republicans countered that Democrats were upset because their “extreme” views on abortion were being made clear to the public.

“What my Democratic colleagues are most concerned about is what this moment actually revealed. It was a moment of unbridled honesty about their agenda,” said Republican Del. Todd Gilbert, referring to a video exchange between him and Democratic Del. Kathy Tran.

Existing state law does not put an absolute time limit on abortions and Tran’s legislation does not alter that.

Her legislation would reduce the number of doctors who would have to certify late-term abortions are needed from three to one. It would also delete the requirement that doctors determine that continuing a pregnancy would “substantially and irremediably” impair a woman’s health. Instead doctors would only have to certify that the woman’s health was impaired.

“We must trust women and their health care providers,” Tran said at a Monday subcommittee hearing, where her exchange with Gilbert was recorded.

Opponents of the legislation, which has failed in both the state House and Senate, said it would give essentially allow for late abortions on demand.

Prominent Republicans and conservative media outlets helped spread the video exchange to a wide audience, with more than 2 million views as of Wednesday.

“What is happening in our country. This literally makes me sick to my stomach,” tweeted Nikki Haley, former U.S. ambassador to the United Nations, in response to the video.

What is happening in our country. This literally makes me sick to my stomach….#AdoptionIsAlwaysAnOption https://t.co/OdAU4gjMh8

Florida Sen. Marco Rubio was one of several Republicans to denounce the comments, tweeting that Northam is openly supporting legal infanticide.

I never thought I would see the day America had government officials who openly support legal infanticide. https://t.co/VzM4FPO7QT

Yheskel, the governor’s spokeswoman, said Northam was only trying to describe the “tragic or difficult circumstances” involved in a late-term abortion.

“Attempts to extrapolate these comments otherwise is in bad faith and underscores exactly why the governor believes physicians and women, not legislators, should make these difficult and deeply personal medical decisions,” she said.

Republican House Speaker Kirk Cox gave a floor speech — which speakers almost never do — Wednesday where he publicly scolded himself for not doing more to restrict abortions and said he worried Virginia was on the verge of adopting abortion laws similar to those in liberal states. New York just approved an abortion-law overhaul that includes a provision permitting late-term abortions when a woman’s health is endangered.

Republicans currently have a narrow majority in the Virginia General Assembly. Virginia is one of only a handful of states to hold legislative elections later this year and Democrats have a strong chance of taking control of the legislature.

President Donald Trump said he thought the controversy surrounding Tran and Northam’s comments would be a boost to conservatives.

“This is going to lift up the whole pro-life movement like maybe it’s never been lifted up before,” Trump said in an interview with The Daily Caller.