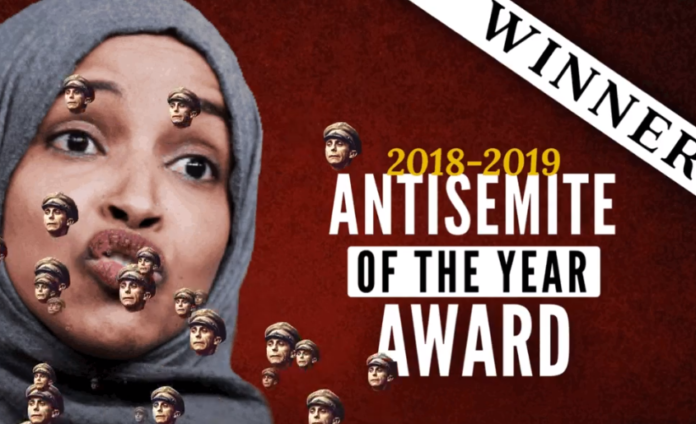 One week ago, Dov Hikind launched his “Antisemite of the Year Award” voting, featuring a top ten of rabid anti-Semites and receiving thousands of votes. It was close race that pinned the classic hater, Louis Farrakhan, against his relative newcomer acolyte, Linda Sarsour. But out of nowhere, as the polls were closing, Omar unleashed an antisemitic tirade on Twitter, and suddenly jumped to the top of the voting list.

“Not only did Ilhan Omar win the coveted award, but she did so in a minuscule amount of time, so she deserves extra credit for that,” said Dov Hikind, former New York State Assemblyman, and chairman of the Coalition for a Positive America. “With this win, and her endless stream of antisemitic consciousness that finds its sad expression in tawdry tweets, Ilhan is poised to be one of the leading antisemites for years to come.”

As the winner of the anti-Semite of the Year Award, Hikind will be sending a signed copy of Hitler’s Mein Kampf so that she can have more inspiration.

‘Twas a tight race but as a thoroughbred Antisemite, @ilhan surpassed all others tnx to her Goebbels-style remarks.

A signed copy of Mein Kampf is on the way! pic.twitter.com/ZnmdV8CZtx

Who will win the “Antisemite of the Year” award? @IlhanMN? @RashidaTlaib? @LouisFarrakhan? @LindaSarsour? Or @jeremycorbyn?

Winner will be announced tonight and will receive an autographed copy of Mein Kampf!

The time has come to demand Dem leaders speak out against @ilhanmn for her vile antisemitism. This isn’t going away. Where is @nancypelosi @SenSchumer @RepJerryNadler @RepEliotEngel @RepAdamSchiff @DWStweets and DNC leadership? Have they lost their ears, eyes, or damned minds? pic.twitter.com/mRhtDMJSJC