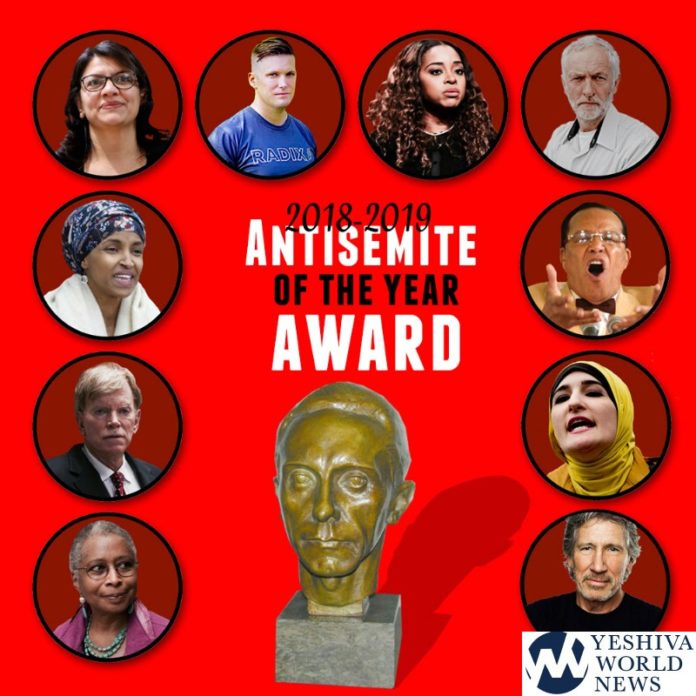 “This is a participatory approach to having a social conversation to determine who among these ten celebrated racists deserves the moniker of ‘Antisemite of the Year’ for their contributions to the spreading of Nazi-level propaganda that would make Joseph Goebbels (Nazi propaganda minister) proud,” said Dov Hikind, former New York state assemblyman, and chairman of the Coalition for a Positive America

The ‘Antisemite of the Year Award’ campaign presents ten of the most notorious antisemites who are presented with one of their many offending statements that prove a consistent antisemitism. Online users can vote for any of the ten nominees presented or submit a ‘write-in’ choice. The winner, with most votes, will win the Joseph P. Goebbels Excellence in Propaganda Grant, a value of $5,000, which will go to helping the winner publicize their antisemitic comments through an online campaign. They’ll also get a signed bobble-Goebbels-head that spews out antisemitic vitriol every time you make him open his mouth.

“This campaign serves as a warning to those who will later say they didn’t know or weren’t warned,” cautioned Hikind. “Whether they’re on the Left or the Right, all of these haters have been nominated because they are consistent in their expressions of hatred for the Jewish people, sometimes expressed in code of ‘anti-Zionism’ which everyone knows is just the in-vogue way of being a Jew-hater. They also hold the proud distinction of being the faces of this new-layer of the ‘oldest hatred’.”

Every year, antisemites battle it out to be the most vile in their anti-Judaism.

Time has come to acknowledge the greatest of the worst antisemites with the “Antisemite of the Year” Award.

Who will win the “Antisemite of the Year” award? @IlhanMN? @RashidaTlaib? @LouisFarrakhan? @LindaSarsour? Or @jeremycorbyn?

Winner will be announced tonight and will receive an autographed copy of Mein Kampf!