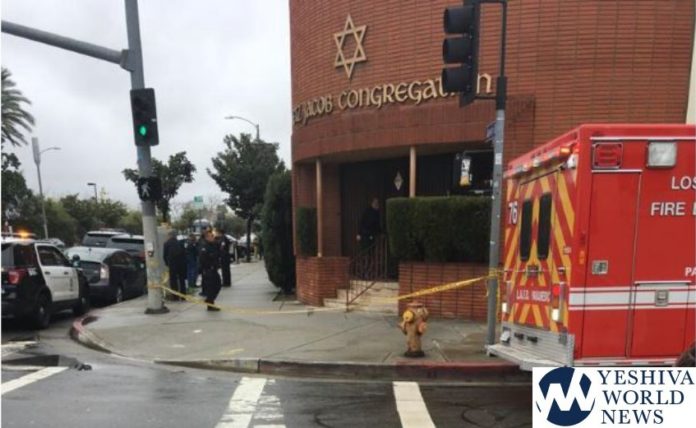 A suspicious individual was shot at a Chabad girls high school in Los Angeles on Thursday afternoon.

Police and paramedics responded to the Ohel Chana High School, located inside Etz Jacob Congregation on the 7600 block of Beverly Boulevard, at 12:24PM.

In an email to parents, the school said it’s security guard observed the man “canvassing” the outside of the school.

Video (see below) shows the victim was filming the school property just moments before he was shot, something which he is legally allowed to do.

The first few seconds of the video show the shooter being taken into custody. Sources tell YWN that the security guard is also a member of Los Angeles Shmira.

The victim uploaded almost an hour of video to YouTube (it has since been removed). He is seen observing Frum girls on the street while wondering aloud if it’s a “Jewish tradition” that they are dressed a certain way. He circles the school building while filming and making comments. He is confronted by a security guard, who repeatedly asks him to stay away from the building.

The victim then approached a security guard standing behind a fence. The guard drew a firearm and pointed it low, holding it steady for several minutes. He then appeared to lower the gun for a moment, but quickly raised it back up. At that moment, the gun appears to go off in his hand. It’s not clear from the video whether the shooting was intentional. It is also not clear whether the victim was struck by the bullet, shrapnel or anything else.

Later in the video, the security guard can be heard saying he fired a “warning shot” and it was aimed “at the ground”.

Authorities initially identified the victim as a man in his 30s. However, in videos posted to YouTube the individual identifies as transgender, and says he “prefers to be identified as female”.

The circumstances of the shooting were under investigation.

The victim does not appear to have been shot too badly, as the video below – taken for YWN around two hours later – shows him back at the scene talking to police. 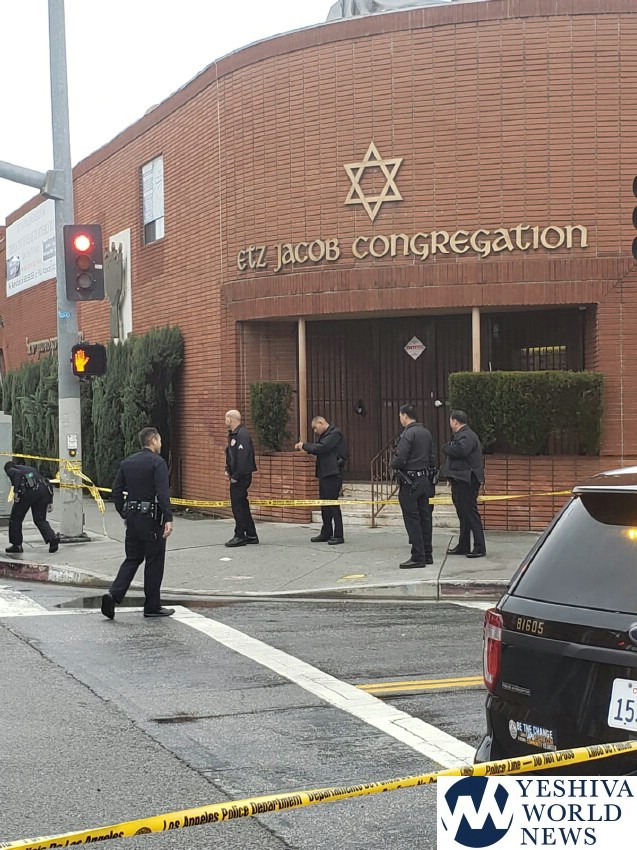 The following is a letter the school sent parents immediately after the incident:

We want to inform you about an incident that took place at the school this afternoon.

An individual was canvassing the outside of the school building.  When he was confronted by our school security guard.  After becoming belligerent, the security guard did shoot him in the leg (he is not critically injured).

We are happy to inform you that absolutely no students were hurt or in danger at any time during this period.

As a precautionary measure, the school building was put on lockdown and will continue to be on lockdown until further notice that all has been cleared by the police.

The students are currently being given extra time to relax before going into class.  We davened an early mincha and will keep posted.

Thank you for your understanding.