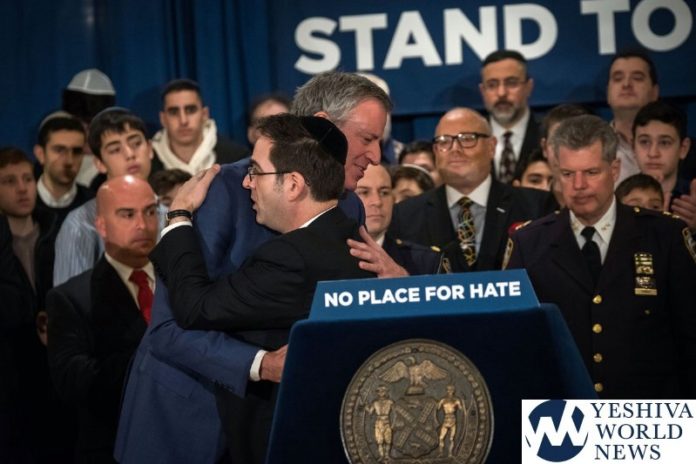 NYC Mayor Bill DeBlasio attended a rally against anti-Semitism in Flatbush on Thursday. The gathering was attended by many elected officials and community activists, and was held at the Kingsway Jewish Center on Kings Highway.

In his remarks, the mayor vowed to stamp out hatred which has seen a significant increase recently. The Mayor also made a strong statement in support of Israel and denounced the Boycott, Divestment and Sanctions (BDS) movement.

“I want to tell everyone, we’re here because this is a community in New York City that has suffered the experience of hate crimes, including recently. This is a community where Holocaust survivors live. And this is a reminder to all of us – and it’s a very sad reality, but anti-Semitism is alive and well in this world, in this city, in this country, and it must be stamped out once and for all.

This is not a small thing. People right here in this community in Brooklyn have seen in their own lives what happens when anti-Semitism goes unchecked, when people stay silent, when the authorities don’t do anything, in countries that families here came from, they watched complacency, silence. They watched opportunism that led to horrifying results. This is why if anyone tries to dismiss anti-Semitism, if anyone tries to suggest that it’s not such a big problem, they need to look at history, not just a little bit of history, two millennia of history, of bias and discrimination against the Jewish people in countries all over the world – and unfortunately we’re still grappling with it here. They’re still grappling with it and Europe. It never went away and we have to be blunt about it. It never went away and we’re dealing with it to this day and it’s very dangerous. History tells us, if you take it lightly, people will be hurt and people will die and we will not allow that in New York City. This place is proud of being a city for everyone – a city for everyone, a city that respects everyone. We also are the city with the largest Jewish population of any city in the world, and we have to be a beacon. We have to be the example to the entire world of what it means to protect our Jewish community. This is what we’re here to say today. New York City will never be silent in the face of hatred.

“We need to understand the place of Israel in world history, because it connects here. We need to understand that Israel was created not just as a dream of a homeland for people who had lost their homeland, but also as a refuge from a world filled with hate. Now, this is a government gathering, but it doesn’t stop me from making a bipartisan statement, a bipartisan statement. Democrats and Republicans with equal fervor need to say – Israel must exist so the Jewish people know they are always protected.”

“Maybe some people don’t realize it, but when they support the BDS movement, they are affronting the right of Israel to exist and that is unacceptable,” de Blasio said.

The video below are the remarks made by Assembly Member Simcha Eichenstein, and Council Member Kalman Yeger.

Interestingly, Councilman Chaim Deutsch took to twitter to ask why he was not invited “Intrigued as to why @NYCMayor is coming to South Brooklyn today to denounce anti-Semitism, yet only one @NYCCouncil member was notified (& not the one whose district he’s coming to)! It’s a disservice to the Mayor when his staff plays politics ‘on his behalf’”

YWN spoke to a source at City Hall who denied this, and said the entire Jewish Caucus (which Deutsch is part of) was notified about this event. Additionally, the event was open to the press, and was in the daily (public) schedule of the Mayor, released on Wednesday.

Additionally, Councilman’s Deutsch tweeted this at 9:27AM, when the Mayor had not yet even arrived at the location.

Intrigued as to why @NYCMayor is coming to South Brooklyn today to denounce anti-Semitism, yet only one @NYCCouncil member was notified (& not the one whose district he’s coming to)!

It’s a disservice to the Mayor when his staff plays politics ‘on his behalf’.@JumaaneWilliams

I’m grateful for your strong words condemning antisemitism and the vile BDS movement, and your always vigilant support and protection of the Jewish community. Your words give us great comfort. Thank you. pic.twitter.com/iPH7m5jMIH

Thank you to @NYCMayor DeBlasio & the @NYPDChiefPatrol for convening a press conference to condemn the 81% rise in hate crimes this year, 2/3rds of which are committed against the Jewish community. To the perpetrators: we will find you, and we will put you away. #noplaceforhate pic.twitter.com/ijYy5h4Ldd

Thank you @NYCMayor for your strong words today against antisemitism and in support of the State of Israel: “I am making a bipartisan statement. Democrats and Republicans with equal fervor need to say – Israel must exist so the Jewish people know they are always protected.” pic.twitter.com/pCx0werhrS

Today we gathered to send a clear message that anti-Semitism and hate will not be tolerated in our city nor state. Thank you @NYCMayor de Blasio for your continuous leadership speaking up against BDS, anti-Semitism, and all acts of hatred. pic.twitter.com/Pzq2aNxe2b 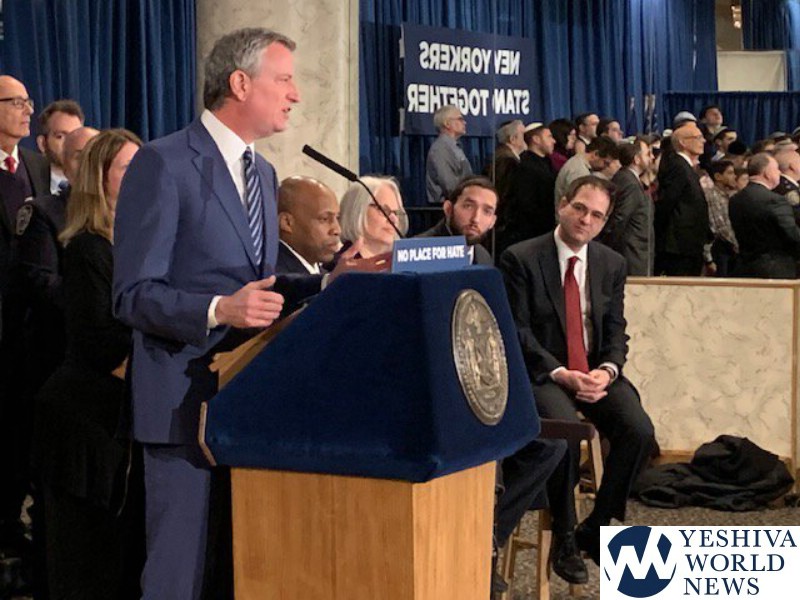 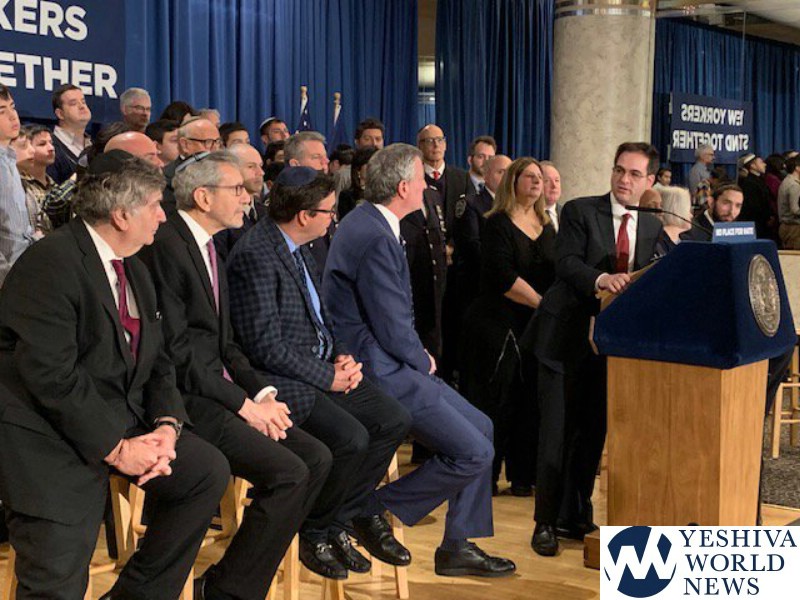 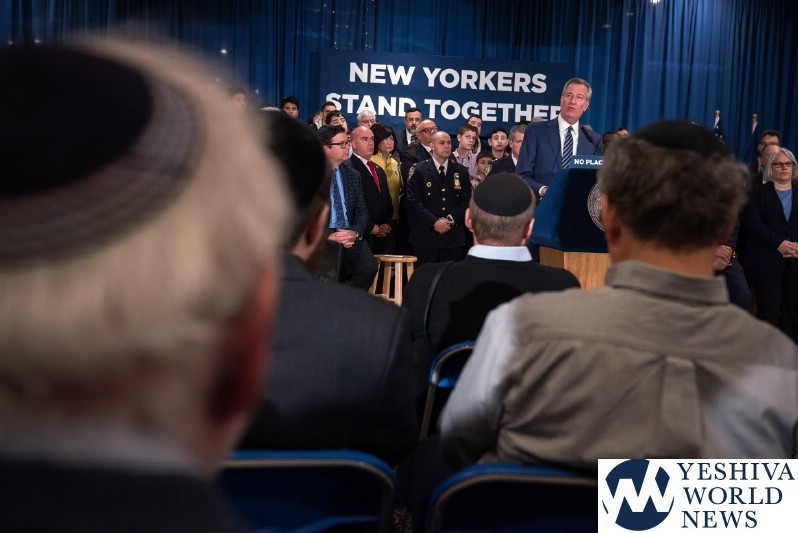 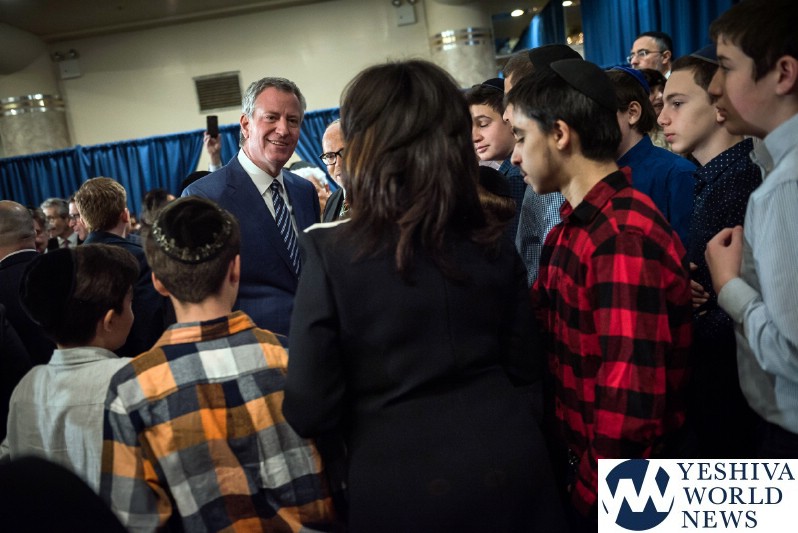 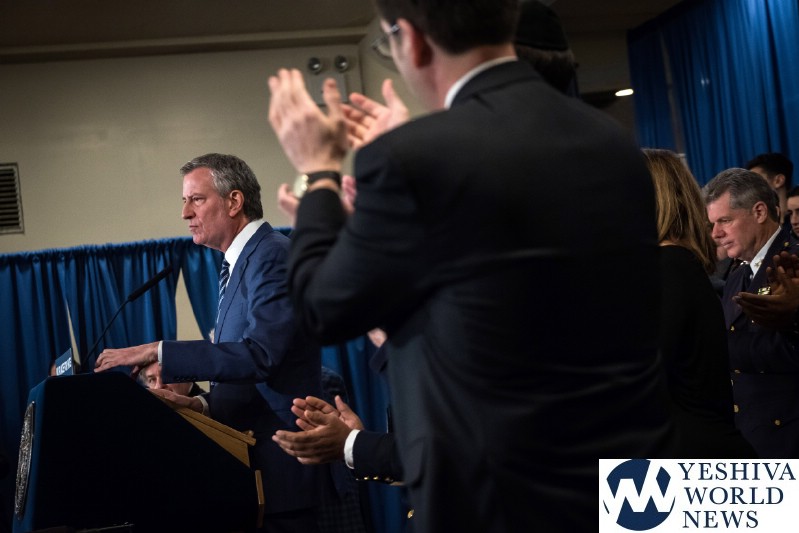 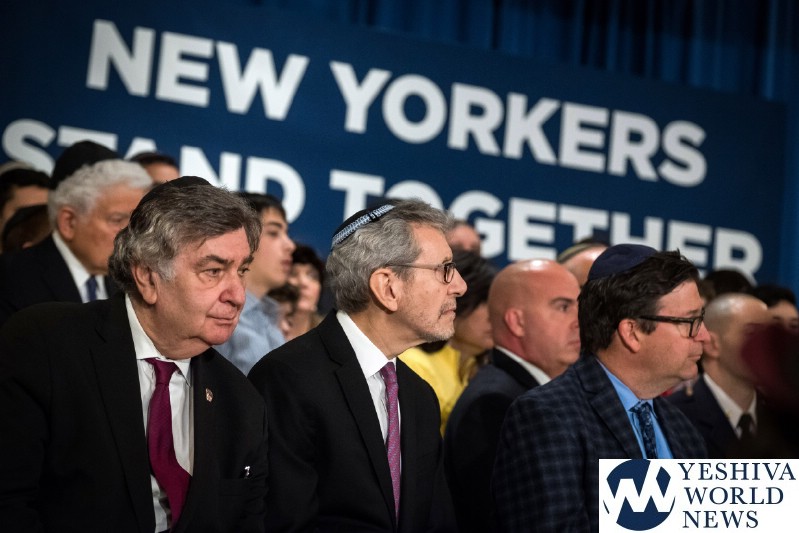 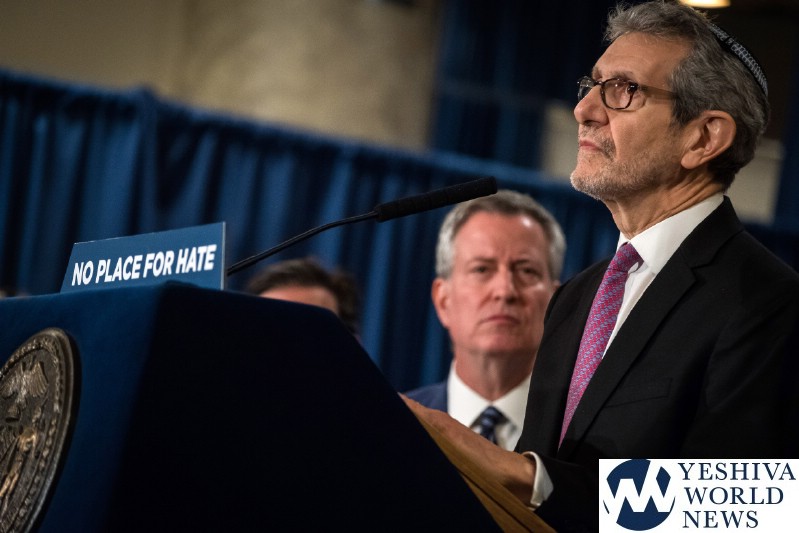 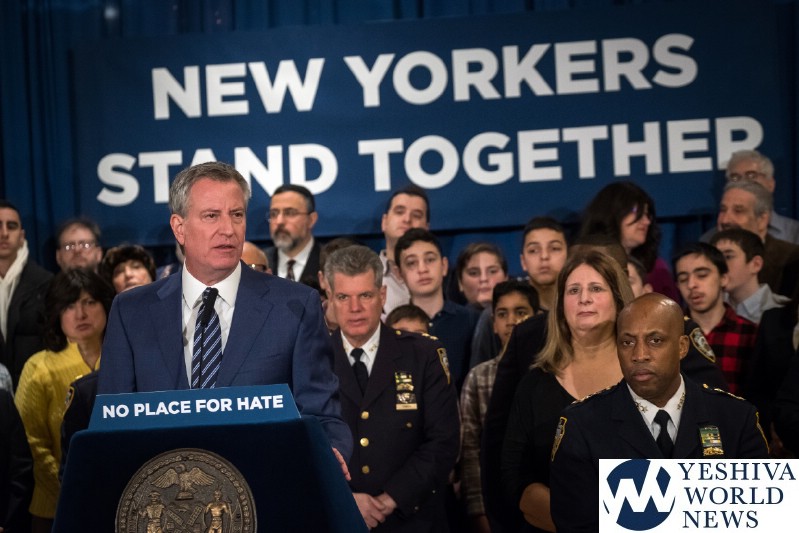 July 6, 2020 6:03 pm
30
The ruling has just been handed down by the judge: There will be no overnight summer camps in NY this summer. The attorney representing the...

Heat Will Stay Stuck On Extra High For July In Most...