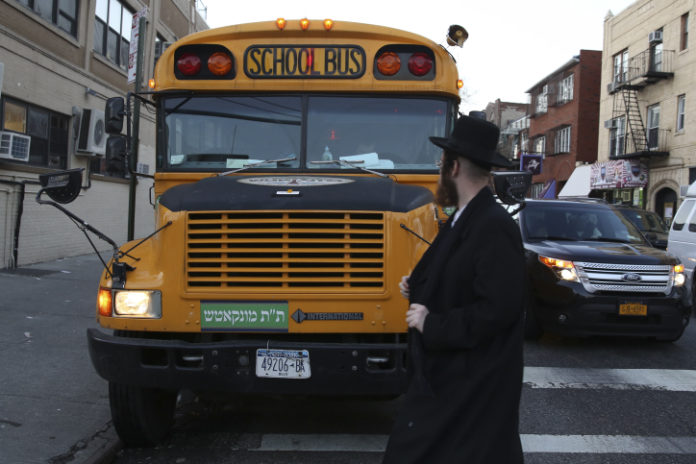 A broad coalition of Yeshivas, yeshiva parents and organizations that promote and protect the rights of parents to choose yeshiva education for their children filed a lawsuit today challenging the new State Education Department (SED) guidelines regulating all of the state’s private schools.

Failure to comply with the SED requirements can lead to a school being ordered to close and parents being given thirty days to switch their children to different schools.

The Yeshivas that filed suit today were five of the original yeshivas established in New York – and the United States. Yeshivas Rabbi Chaim Berlin, Yeshiva Torah Vodaas, Mesifta Tifereth Jerusalem, Rabbi Jacob Joseph School, and Yeshiva Chsan Sofer – The Solomon Kluger School, were founded between 1899 and 1918 and have been in continuous operation in New York since then. They have produced tens of thousands of graduates who participate in all aspects of New York and American life. They were joined by PEARLS, Agudath Israel of America and Torah Umesorah, and a coalition of parents whose constitutional rights to direct the education of their children have been undermined by the SED Guidelines.

The suit comes on the heels of a separate court challenge by the NYSAIS (New York State Association of Independent Schools) that likewise maintains that SED overreached its authority by issuing the new guidelines.

Today’s lawsuit argues that the State Education Department does not have the statutory authority to impose the comprehensive set of requirements and mandates that are contained in the Guidelines. It further argues that SED failed to follow the process for regulations required by the State Administrative Procedures Act, which include publication, a notice and comment period, public hearings and formal adoption by the Board of Regents. SED ignored each of those steps. The lawsuit asked the court to stay the enforcement of the new SED Guidelines.

The new guidelines represent a radical reorientation of the State’s relationship with its private schools. Since the 19th century, the State has respected the rights of private schools and the parents who choose them for their children to operate independently. Yet the Guidelines issued last November would require all private schools to have their curriculum, school schedule and faculty choices subject to the review and approval of local public school officials.

Parents in the Orthodox community have long made it clear that they are proud of the quality and well-rounded education their children’s’ yeshivas provide. Their community and elected leaders have repeatedly voiced objections to SED guidelines that subject the yeshivas to rigid curriculum requirements and checklists that undermine their ability to continue their emphasis on Jewish studies, texts, history, ethics and morals. .

“The guidelines pay lip service to the importance of flexibility,” said Rabbi Chaim Dovid Zwiebel, executive vice president of Agudath Israel of America, “while at the same time they impose rigid curricular obligations on all nonpublic schools. We cannot allow each yeshiva to depend on the mercy and whims of individual bureaucrats. We have a responsibility to Yeshiva parents, and to the continuation of a culture that spans generations, to stop this terrible governmental overreach.”

“We will do whatever it takes to protect our religious values and the yeshiva system,” said Rabbi David Niederman of PEARLS. “Over the past century we have produced hundreds of thousands of successful alumni, law abiding citizens and thriving families. The overwhelming majority of alumni continue to show their confidence in the yeshiva system by enrolling their children.

“SED has ignored the uniqueness and values of our education system,” Rabbi Niederman said. “We will continue our efforts to assure that our students graduate with the strongest religious values, coupled with the necessary skills to succeed in life. There is no reason, let alone any justification, for government intrusion into our yeshiva system and deprivation of our parental and religious rights. These guidelines must be opposed.”

THE FOLLOWING WAS PUBLISHED ON WEDNESDAY NIGHT BY YWN:

A group of 11 independent schools, along with the association that represents more than 190 independent schools across New York State has filed a lawsuit alleging that the State Education Department Guidelines released in November are illegal and must be stopped.

The schools sued Education Commissioner MaryEllen Elia. Their lawsuit alleges that “SED’s new regulations as an unconstitutional delegation of authority to elected officials and an improper exercise of authority not found in existing New York State education law.

Commissioner MaryEllen Elia and her staff…have unilaterally bestowed upon local boards of education broad oversight powers to review and judge independent schools.” The schools continue that the New Guidelines unconstitutionally delegates…to Local School Districts, even though this power can only be granted by the Legislature and not an administrative agency like the Department.”

The lawsuit also charges that the Commissioner intentionally avoided the public process that is supposed to be followed for new regulations. The schools charged that instead of following the correct procedure, SED “developed the Guidelines using a process that bypassed the notice and comment period required under the State Administrative Procedures Act. In addition, the Commissioner’s actions violate the separation of powers doctrine that is one of the bedrock principles of New York State government.”

The lawsuit concluded that “The violation of Petitioners’ constitutional rights through, among other things, the imposition of the New Guidelines and interference in the educational missions and methods of independent schools, would cause irreparable injury.”

There were eleven private, independent schools listed in the lawsuit.

As readers of YWN are aware, leading Roshei Yeshiva have been raising the alarm about the new Guidelines since they were released in November. They complained about the State’s intrusion into private school curriculum and practices.

It is wonderful to see this group on non-religious schools has now come to the same conclusion, and has filed a lawsuit making the same points our Roshei Yeshiva have been making.