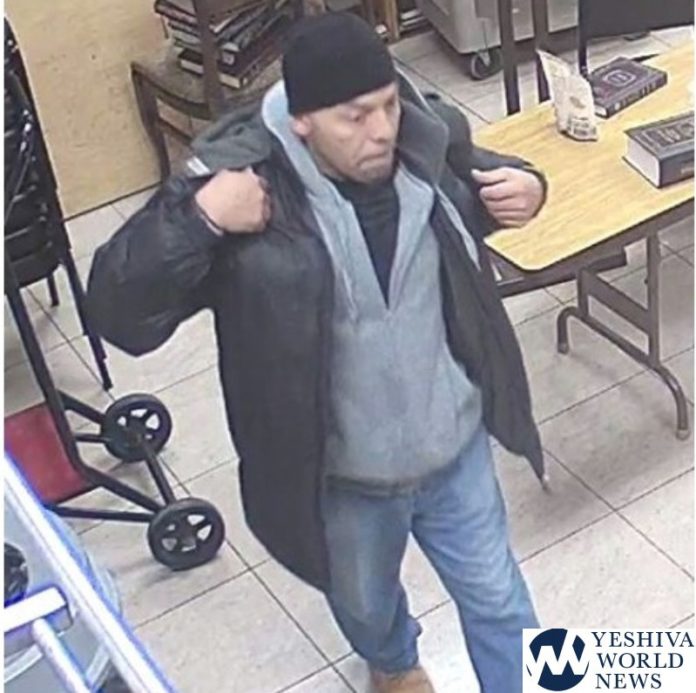 The NYPD is asking the public’s assistance identifying the suspect in the attached surveillance video and photo wanted for questioning in regard to multiple burglaries of Williamsburg Shuls.

On Shabbos, February 9, 2019 at 2:30AM, an unidentified male entered a Shul at 27 Lee Avenue through an unsecured front door and removed approximately $250 from a Pushka. He fled in an unknown direction.

On Saturday, February 9, 2019 at 4:00PM, the male entered 240 Hooper Street (Transfiguration Church) through an unsecured rear window and removed approximately $250 worth of office supplies before fleeing in an unknown direction.

On Tuesday, March 12, 2019 at 2:50PM, the male entered a Shul located at 469 Bedford Avenue, and removed approximately $600 and office supplies before fleeing in an unknown direction.

On Tuesday, March 12, 2019 at 9:50PM, the male entered a Shul located at 171 South 9th Street, and removed approximately $400 and office supplies before fleeing in unknown direction.

The person wanted for questioning is described as a Hispanic male, approximately 30-40 years of age. He was last seen wearing a black cap, black jacket, grey hooded shirt, blue jeans and tan shoes.

Surveillance video and photo are attached.

Anyone with information in regard to the identity of this male is asked to call the NYPD’s Crime Stoppers Hotline at 1-800-577-TIPS (8477) or for Spanish, 1-888-57-PISTA (74782). The public can also submit their tips by logging onto the CrimeStoppers website at WWW.NYPDCRIMESTOPPERS.COM, on Twitter @ NYPDTips.

Iran Strikes Defiant Tone At UN Under Crushing US Sanctions

DEMS THREATEN TO PACK THE COURT! Some Dems, Not Yet Biden,...