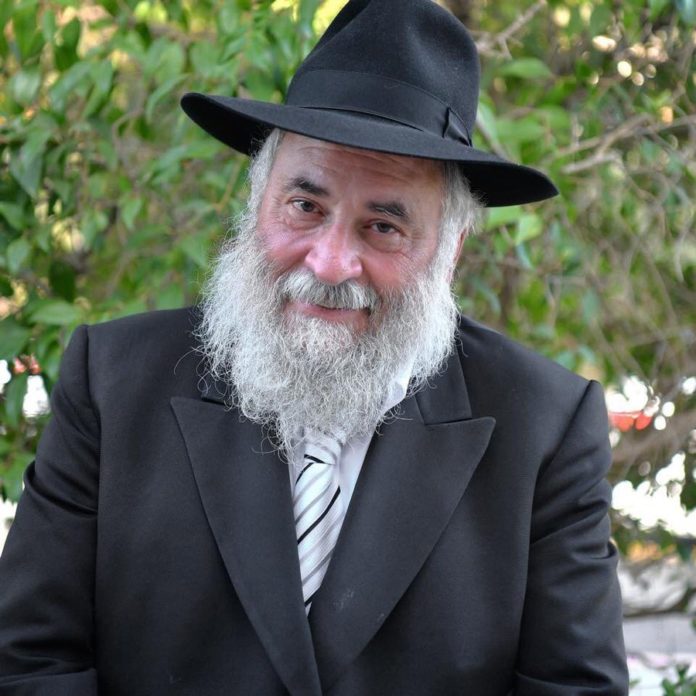 Rabbi Yisroel Goldstein, a victim of the shooting at Chabad of Poway, (California) on Shabbos, continues to make an incredible Kiddush Hashem, following his earlier interview on Sunday morning with NBC’s “Today” show hosted by Willie Geist.

Now, Rabbi Goldstein released a video from his hospital room, where he offers a message to Jews around the world with words of wisdom, pain and healing.

In the minutes after the gunman fled the scene of the shooting that killed a woman inside his Southern California synagogue, a wounded Rabbi Goldstein wrapped his bloodied hand in a Tallis and addressed the panicked congregation, vowing to stay strong in the face of yet another deadly attack in a house of worship.

“We are a Jewish nation that will stand tall. We will not let anyone take us down. Terrorism like this will not take us down,” Goldstein recalled telling his congregants after the gunfire erupted.

As YWN reported, before he would allow himself to be rushed to the hospital, Rabbi Goldstein turned to his congregation and spoke. He referenced the “Vehi She’amdah” passage from the Haggadah, read at the Pesach Seder: “Not just one alone has risen against us to destroy us, but in every generation they rise against us to destroy us; and the Holy One, blessed be He, saves us from their hand.” He went on to speak about remaining strong in the face of adversity and hate.

Congregant Lori Kaye H”YD, 60, was killed in the shooting, which injured Goldstein, 8-year-old Noya Dahan and her 34-year-old uncle, Almog Peretz, authorities said. Hours after the three wounded were released from hospitals, Goldstein described the ordeal at a news conference Sunday outside the Shul north of San Diego.

Goldstein said he was preparing for the conclusion of Krias HaTorah on the last day of Pesach and saw a young man wearing sunglasses standing in front of him with a rifle.

And then, Goldstein says, “miraculously the gun jammed.”

The White House acknowledged the call. “The President expressed his love for the Jewish people and the entire community of Poway,” Deputy Press Secretary Judd Deere said in a statement.

I spoke at length yesterday to Rabbi Yisroel Goldstein, Chabad of Poway, where I extended my warmest condolences to him and all affected by the shooting in California. What a great guy. He had a least one finger blown off, and all he wanted to do is help others. Very special!

In the NBC interview earlier on Sunday, Rabbi Goldstein described the horrific attack:

“I was face-to-face with this murderer, terrorist, who was holding a rifle and looking straight at me,” Goldstein said. “As soon as he saw me, he started to shoot toward me. My fingers got blown away.”

Goldstein spoke about the woman who was killed in the attack, Lori Kaye H”YD, a founding member of the three-decade-old congregation.

“Just a kind soul,” said Goldstein, who underwent surgery at the hospital. “Everyone in the community knew her.”

Rabbi Goldstein, who is originally from the Crown Heights neighborhood of Brooklyn, N.Y., is also a Jewish chaplain with the San Diego sheriff’s department. Goldstein has been described as “talkative, warm and kind” by members of the Southern California community.

John T. Earnest, 19, surrendered to police after bursting into the synagogue and opening fire as about 100 people were Davening inside.

The attack on Shabbos came exactly six months after a mass shooting in a Pittsburgh synagogue.

Earnest, who had no previous contact with law enforcement, may face a hate crime charge in addition to homicide charges when he’s arraigned later this week, San Diego County Sheriff William Gore said. He was being held without bail, and it was unclear if he had an attorney. Police searched Earnest’s house and said he was also being investigated in connection with an arson attack on a mosque in nearby Escondido, California, on March 24.

There were indications an AR-type assault weapon might have malfunctioned after the gunman fired numerous rounds inside, Gore said. An off-duty Border Patrol agent fired at the shooter as he fled, missing him but striking his getaway vehicle, the sheriff said.

Shortly after fleeing, Earnest called 911 to report the shooting, San Diego Police Chief David Nisleit said. When an officer reached him on a roadway, “the suspect pulled over, jumped out of his car with his hands up and was immediately taken into custody,” he said.

[Statement By Chabad-Lubavitch Headquarters on the Fatal Poway Shooting]

Congregants clap welcoming their Rabbi back to synagogue in Poway. Rabbi Goldstein’s hands were shot up by gunman in #synagogueshooting. His right index finger had to be amputated. pic.twitter.com/sm8AWkrith

Eight-year-old Noya Dahan said she had finished Davening and had gone to play with other children at when gunshots rang out. Her uncle, 34-year-old Almog Peretz, grabbed her and the other children, leading them outside to safety as her leg bled from a shrapnel wound.

“I was scared, really, really scared,” said Noya, recalling how the group of children cried out of fear after a gunman entered Chabad of Poway and started shooting. “I didn’t see my dad. I thought he was dead.”

Her father, 32-year-old Israel Dahan, said he flipped over a folding table as soon as he saw the man enter carrying a long rifle and told people to run. He went to look for his children and found two had been ushered out and his 5-year-old was hiding in the bathroom, he said.

Dahan and her family had come to America from Israel, where their hometown of Sderot was (and remains) constantly under fear of terrorist rockets fired from nearby Gaza.

PHOTOS: Noya Dahan, 8, rides on the shoulders of her father, Israel Dahan, at a candlelight vigil held for victims of the #Chabad of #Poway synagogue shooting. . Noya and her uncle Almog Peretz were wounded in the attack that also killed 60-years-old Lori Kaye H"YD and wounded the Shul's Rabbi. . Rabbi Yisroel Goldstein is seen being hugged as he leaves a news conference at the Shul earlier on Sunday.

Friends described Kaye as giving, warm and attentive to community members on their birthdays and when they were sick. A wife and mother, she loved gardening and made delicious challah for her family and friends, said Roneet Lev, 55.

Goldstein described her as a pioneering founding member of the congregation and said he was heartbroken by her death. He said the attack could have harmed many more people had the shooter turned toward the sanctuary where so many were praying.

“Lori took the bullet for all of us,” the rabbi said, his hands wrapped in bandages. “She didn’t deserve to die.”

He said that Kaye’s physician husband was called to tend to a wounded worshipper and fainted when he realized it was his wife.

In the clip below, listen to a sister of Rabbi Goldstein, as she describes the attack based on first hand information:

When the gunfire erupted, another worshipper, Shimon Abitbul, said he immediately placed his 2-year-old grandson on the floor and waited for a break in the shooting to grab the boy and sprint away.

Then Abitbul ran back to the shooting scene to try to help a woman he described as having a hole in her chest and who later died, he said Sunday.

Abitbul, who was visiting from Israel and staying with his daughter and her family in Southern California, said he was still coming to grips with the carnage.

“All of us are human beings,” he said. “It doesn’t matter if you are Jews or Christians or Muslims.”

Peretz, who was wounded in the leg, was visiting from Israel, staying with family who had moved to California just a few months ago from the Israeli town of Sderot near the Gaza border, a frequent target of rocket attacks by the Hamas militant group. He said a man entered the synagogue and started shooting in all directions.

“I was with my back to the shooter. I heard a shot or two and then turned around to face him and that’s when he fired at me. I ran quickly, picking up a small girl in my hands,” he told the Israeli YNet news site. “He hit me once in the leg and I kept running. I didn’t feel it much since there were so many bullets flying by. I heard them and I saw them right next to me.”

VIDEOS/PHOTOS: Almog Peretz, who was injured in the shooting attack at #Chabad of #Poway, does a walk-thru in the Shul, showing bullet holes and where he heroically rushed children to safety. @misaskimheadquarters is also seen working in the building on Sunday.

Gore said authorities were reviewing Earnest’s social media posts, including what he described as a “manifesto.”

A person identifying himself as John Earnest posted an anti-Jewish screed online about an hour before the attack. The poster described himself as a nursing school student and praised the suspects accused of carrying out deadly attacks on mosques in New Zealand last month that killed 50 and at Pittsburgh’s Tree of Life synagogue on Oct. 27, in which 11 people were killed.

“It was a hate crime, no doubt about it,” national security adviser John Bolton said on “Fox News Sunday.” He said investigators have not seen any connection between the suspect and other extremist groups. 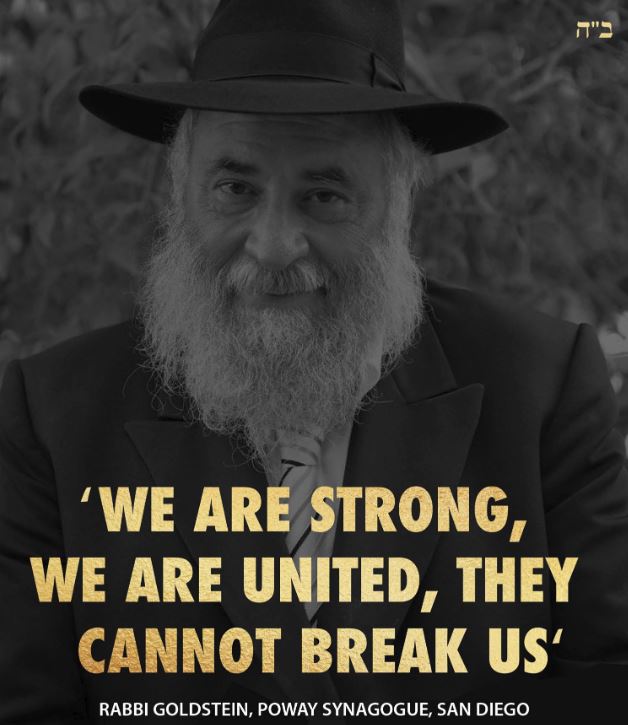 California State University, San Marcos, confirmed that Earnest was a student who was on the dean’s list and said the school was “dismayed and disheartened” that he was suspected in “this despicable act.”″

Several dozen people, many wearing black, gathered on a corner in Poway on Sunday to show their support for the victims and synagogue congregation and to call for an end to hate and violence.

They carried signs reading “no more killing” and “Shalom.” Drivers honked as they passed by. A young boy sat with a cardboard sign reading “we must do better”.

Deb Lira, 71, of San Diego, said she was angry and sickened by the attack in what has long been a peaceful community. “I’m here because I’m Jewish and this is my message,” she said, pointing to a sign that read “never again” and “never forget.”

There was no known threat after Earnest was arrested, but authorities boosted patrols at places of worship Saturday and again on Sunday as a precaution, police said.