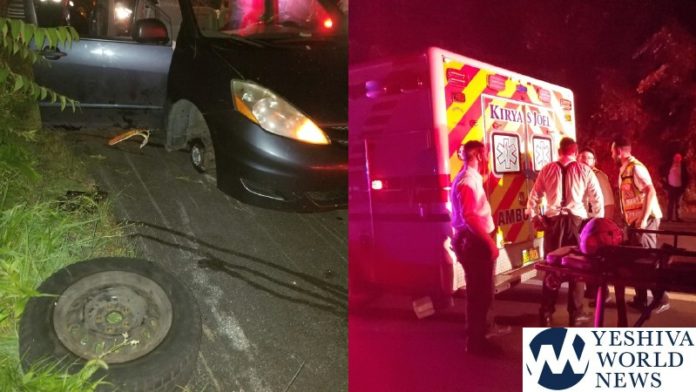 A Jewish man is in critical condition after his own vehicle fell on top of him, early Friday morning.

It happened just after 2:00AM on the NY State Thruway, when the young man was travelling with his wife and children from Montreal to New York. His car suffered a flat tire at around mile-marker 33 (between Kiryas Joel and Monsey), and he began changing the tire on the side of the road. For reasons unknown, the car jack slipped, and the vehicle fell on top of him, pinning him under the vehicle.

Hatzolah from Kiryas Joel, Rockland (Monsey) and Catskills all responded. Rockland Chaveirim was called as well, who was on the scene in minutes. Chaveirim and Hatzolah members were able to lift the vehicle, with the assistance of a passing truck driver and another Jewish driver.

The man was found unresponsive, and a chopper was requested to airlift him to a trauma center. A Medevac arrived and landed on the highway, and the victim was flown to Westchester Hospital, where he is listen in critical condition.

Sources tell YWN that the victim suffered chest and shoulder injuries, and remains sedated in the hospital.