The Hungarian government signed a special agreement with the Orthodox Jewish Communities Association (EMIH) on Monday that grants the country’s Orthodox Jewish community ‘special status’, an official recognition from the state for the first time since World War II.

This development follows decades of injustice during which only Neolog (Reform) Movement in the Hungarian Jewish community have been officially recognized and allocated money from government budgets. Inequality has grown over the years as the Chabad-led Orthodox community continues to thrive.

The agreement was signed by the Deputy Prime Minister, Zsolt Semjén and the Chief Rabbi of EMIH – Association of United Hungarian Jewish Congregation, Rabbi Shlomo Koves who as a result of the recognition, became an official representative of the Jewish community in Hungary. The agreement was signed in the presence of the chief of the Orthodox Rabbinate of Budapest, Rabbi Baruch Oberlander, Chief Rabbi of Israel HaGaon Rav David Lau, President of EMIH, Mr. Sandor Sarkadi, Director of the Rabbinical Centre of Europe Rabbi Arie Goldberg and Chabad (EMIH) Community rabbis.

The Hungarian Jewish community, estimated at between 75,000 and 100,000, is the largest in East Central Europe. Over the years, the Hungarian government has given ‘special status’ to a number of different religious organizations. The distinctive title allows for a representative from each organization who oversees and receives government funding for the educational and religious institutions of his or her respective movement. Catholics were the first ones who acquired ‘special status’, the agreement of which was signed with the Vatican as early as 1998. Two years later, the neolog-reform streams of Judaism in Hungary which enjoyed a cordial relationship with authorities during the Communist-era and had been affiliated with succeeding leftist governments, were granted ‘special status’.

After the signing, Rabbi Shlomo Koves said: “This is an important day for the Hungarian Jewish Orthodox community, which has been served today with historical justice. For centuries, the Hungarian Orthodox Jewish community has been one of the most important and influential communities in the world and is one that has shaped the Orthodox Jewish world as we know it today. We are pleased that the government has chosen to strengthen its relationship with EMIH, to recognize our achievements and acknowledge us as being one of the most vibrant Jewish communities in central Europe. Thanks to our work, 70% of Jews who take part in Jewish life in the country are those whose parents were less religious than their children are. Majority of our community members are those who have returned to Jewish tradition over the past 20-30 years. The agreement that was signed today marks a significant milestone in the resurrection of the Hungarian Jewish community, which was almost wiped out during the Holocaust.”

Rabbi Baruch Oberlander said: “The Lubavitcher Rebbe bore the weight of concern for the fate of Hungarian Jewry, and so he sent us thirty years ago as his emissaries to lead a religious revival among the Jews in Hungary. Thank G-d our operations have been successful and are increasing. Today there are 17 rabbis (more than half of all Hungarian rabbis) serving Hungary’s Jewish community using the Chabad movement’s unique approach towards loving other Jews. Today is a historic day as the authorities have recognized our operations and feel the need to support them. This has also fulfilled the prayer in the will of the Chassam Sofer that the spring of Hungarian Jewry does not dry out, that the tree of Hungarian Jewry not be cut down and that Judaism continue to always thrive.”

Rabbi Menachem Margolin, Chairman of the European Jewish Association, congratulated the Hungarian government, adding that it had once again proven itself in fighting a determined battle not only against anti-Semitism in Hungary, which currently has one of the lowest levels of such sentiment in Europe as evidenced by a recent report from the European Union report, but also for investing in the development of Jewish life.

The Hungarian Jewish community, estimated at about 100,000, is the largest in East Central Europe. Today, eight shuls operate throughout Hungary under EMIH with seventeen rabbis and Chabad emissaries serving members of the local community as well as many tourists in Budapest, Miskolc and Debrecen.

Hundreds of students attend the Chabad elementary and high schools. EMIH operates a canteen for needy, a publishing house, shechita, restaurants and more. The number of community institutions is increasing year by year. The number of institutions in the community continuously increases year by year. This past September, two new shuls on the banks of the Danube were inaugurated in memory of the Jews who were murdered on the river’s bank during the Holocaust. Last year, the historic shul in Buda was inaugurated after nearly 400 years. Built in the middle of the 13th century along with the establishment of the city, it served the local Jewish community, almost continuously, until the early 15th century. The Central Synagogue in Obuda opened 9 years ago and was returned to the community after a 60-year stint. The Obuda Shul, recently dubbed ‘The Hungarian Churva’, was built some two hundred years ago in the Buda section of the Hungarian capital. Its magnificent prayer hall spans 400 square meters and has 600 seats along with a 15-meter high ceiling. The building has two more floors, which offer an event hall and activity rooms for the children of the Jewish community. 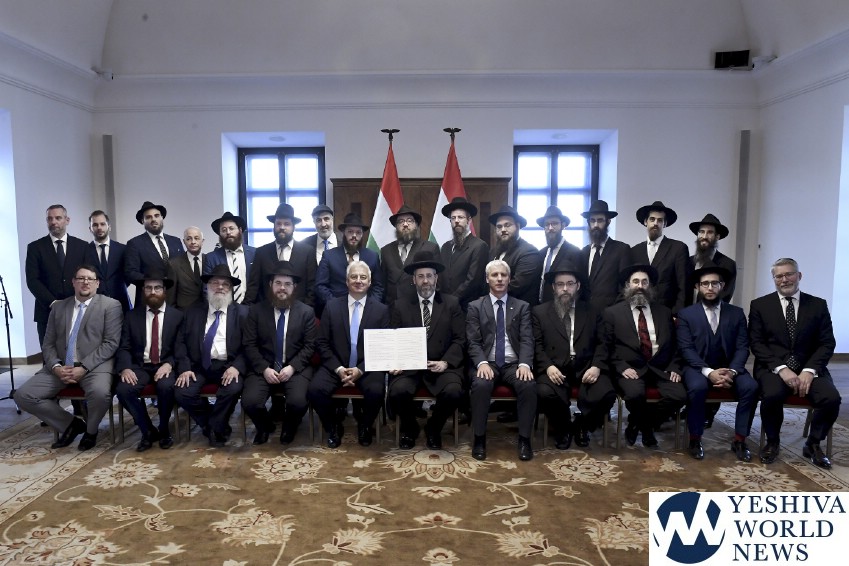