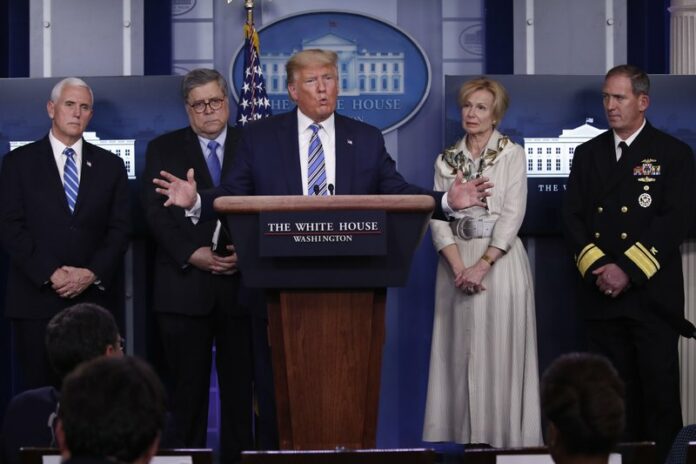 President Donald Trump has a new daily ritual now that the pandemic has put the kibosh on the signature campaign rallies that helped him get elected four years ago: the coronavirus briefing.

Standing on the once-abandoned White House briefing room stage flanked by public health experts, Trump holds court with reporters and directly addresses the American people, providing updates on his administration’s efforts to combat the pandemic and trying to demonstrate that he’s in charge.

The updates are far more staid than his raucous rallies and lack the adoring crowds and “Lock her up!” chants of the political gatherings. But they include many of the same features as his now-on-ice mass rallies: plenty of self-congratulation and airing of grievances, press bashing, tirades against his critics and an ample dose of misleading information.

That, combined with measured updates from public health officials, has created a sometimes confusing split screen for Americans watching at home, many under stay-at-home restrictions and anxiously tuning in to cable news for updates.

For the first few days of the crisis, the briefings were led by Vice President Mike Pence, who offered buttoned-up updates in a calming, paternal tone. But Trump, who never likes to cede the spotlight, quickly decided to make himself the star of the daily show.

Now, every day of the week, including Tuesday, when he sat down for a separate Fox News town hall in the Rose Garden, Trump emerges from behind closed doors and reads a summary of his administration’s latest efforts. Then he invites other administration officials to make remarks from the often-crowded stage where social distancing recommendations are flouted.

Then he opens things up for questions, and the discussion can go in many directions.

Trump’s disposition varies. On some days, he has struck an urgent tone, calling on Americans to come together to defeat a common enemy. On others, he has angrily defended his administration’s handling of the pandemic and lashed out at reporters, including those who have pressed him on the economic impact of mass closures, testing shortfalls and the struggles of doctors and nurses to find basic supplies.