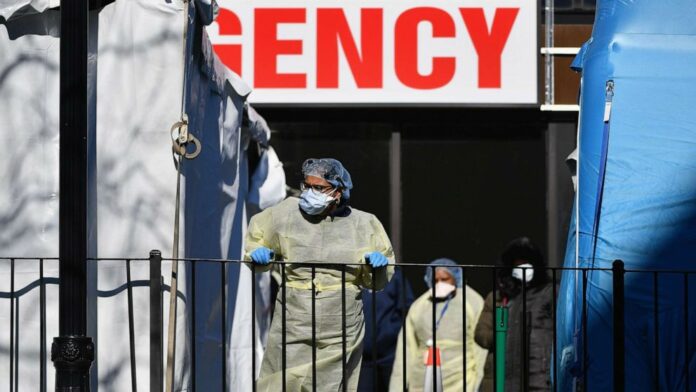 The mammoth fight against coronavirus in New York intensified Sunday as the state grappled with over 59,000 cases and at least 965 deaths. That’s an increase of 237 deaths in less than 24 hours.

Gov. Andrew Cuomo called for “all hands on deck” to help stop the virus. He extended his order for all non-essential New York workers to stay home until April 15.

The death toll in New York City increased by nearly 100 over the course of Sunday and now stands at 776 as cases near 34,000.

New York City Mayor Bill de Blasio said his city is on track to run out of supplies next weekend.

“We have enough supplies to get to a week from today, with the exception of ventilators,” de Blasio said Sunday.

“We’re going to need at least several hundred more ventilators very quickly,” the mayor said. “We are going to need a reinforcement by Sunday, April 5, in all categories, especially ventilators but in other areas as well. And personnel is becoming more and more the issue.”

People will be fined if they are told by officers to disperse, keep moving or maintain distance, but they continue to violate policies anyway.

“If you ignore that order … we’re going to have to fine you. We’re going to give people every chance to listen and if anyone doesn’t listen, then they deserve a fine at this point,” de Blasio said.

President Donald Trump said Sunday he would extend nationwide social distancing guidelines for another 30 days, an abrupt back-down from his push to reopen the country as coronavirus continues to spread.

The 15-day guidelines Trump announced two weeks ago were set to expire on Monday, and the President had suggested over the past week that he was looking to relax them, at least in some parts of the country. He even floated Easter, on April 12, as a potential date by which the country could return to normal.

But on Sunday he said he’d decided to extend the guidelines — which include suggested limits on large gatherings — to April 30, a sign his earlier predictions were overly rosy.