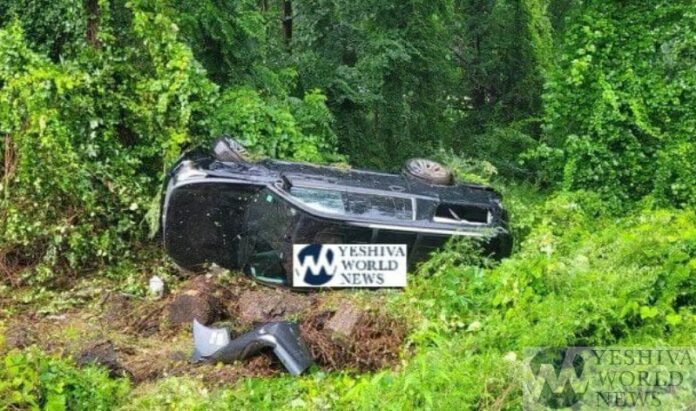 Recently, YWN has unfortunately had to fill these pages with tragedy and sorry. YWN is glad when readers share stories with us to publish that are filled with happiness, and thanks to Hashem. In fact the following story is being shared with the encouragement of these families for that exact fact. They want to do so for kavod shamayim and to express their boundless hakaras hatov to Hashem.

This attached photo was taken this past Thursday, when an SUV filled with Yeshiva Bochrim returning from a camp slipped off the road and overturned. The vehicle rolled over into the woods, and the vehicle was destroyed. The passengers could have easily been ejected from the vehicle – but Bichasdei Hashem, none of that happened. A bewildered passerby on this remote highway immediately pulled over, and one by one, this individual pulled the boys out of the overturned car. Aside from naturally being very shaken up, the boys and the driver were miraculously without injury.

Numerous ambulances responded to the scene and as a precaution all of the boys were transported to a nearby trauma center. After evaluations and exams, one passenger needed a bandaid on his finger..and that indeed was the extent of the injuries. An open and fascinating miracle.

The families asked YWN to extend their gratitude to Boruch Ber Bender and Achiezer for immediately springing into action before the parents could get there and arranging for hospital staff including physicians and chaplaincy staff to be present at the hospital when the boys arrived.

Mrs. Chani Friedman, a hospital chaplain/liasion who lives nearby, also immediately responded to Achiezer’s request and played a huge role in bringing comfort to these boys.

Stories like these need to be publicized and celebrated. They need to go viral on social media just like tragedies do. They need to be recognized and appreciated and shared as much, if not more than any others.

Wishing all of our readers a wonderful Shabbos and a safe rest of summer.