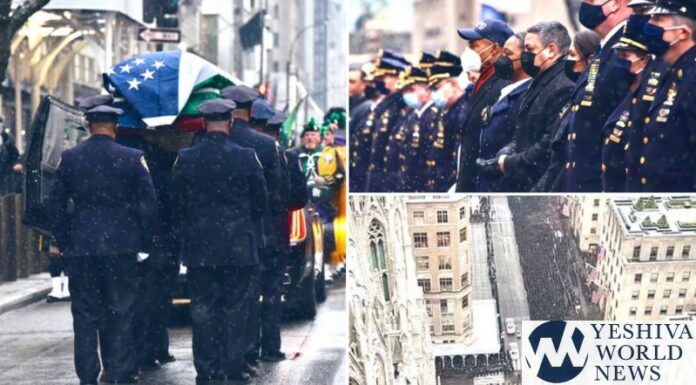 The widow of murdered NYPD officer Jason Rivera blasted the pro-crime policies  of Manhattan DA Alvin Bragg while eulogizing her husband in front of thousands of police officers.

Rivera and a police partner, Wilbert Mora, were both killed last week while responding to a fight in a Bronx apartment. The suspect was shot and killed by a third officer at the scene.

Manhattan DA Bragg has come under intense fire after distributing a memo in which he said prosecutors should lessen charges in many felony cases, and not prosecute at all in numerous other cases, including armed robberies in which nobody got seriously hurt.

“We are not safe anymore, not even members of the service,” the widow, Dominique Luzuriaga, said. “I know you were tired of these laws, especially the ones from the new DA. I hope he’s watching you speak through me right now.”

Her remark was met with thunderous applause from the funeral attendees.

“I’m still in this nightmare that I wish I never had, full of rage and anger, hurt and sad, torn,” Luzuriaga said. “Although I gained thousands of blue brothers and sisters, I’m the loneliest without you.”

“Jason rose through every challenge that crossed his path. He was everything this city and the NYPD needed him to be,” Sewell said. “And it is with sincere admiration and appreciation that I promote him today to detective first-grade.”