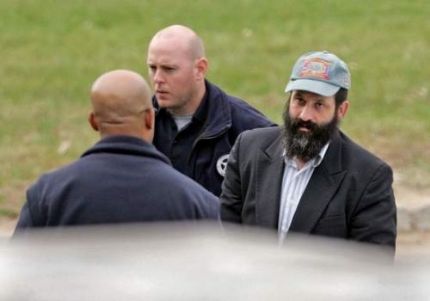 Special to the Yated Neeman:

The scene was surreal. Reb Sholom Rubashkin standing in jail in bright orange prison sweats with the words “Dubuque County Jail” emblazoned across the back, incongruously wearing a borrowed black hat and gartel as he said the words of chazoras hashatz. It was the first time that he was zoche to daven with a minyan since his incarceration on November 14. Reb Sholom, who in an unprecedented and troubling ruling was denied bail by the magistrate, davened with great feeling, as the words emotionally poured from his mouth. “Go’el Yisroel – Who redeems Israel. Ki lishuascha kivinu kol hayom – for Your salvation we hope everyday…”

Indeed, the scene may have been surreal, but the circumstances of Reb Sholom Mordechai Rubashkin’s imprisonment are certainly not. They are downright troubling.

On Monday, January 12, a remarkable gathering took place at the Dubuque County Jail. Rabbinic leaders representing a broad range of the cross-section of American Jewry came to the Dubuque Iowa Jail where they met with Sholom for about one and a half hours, after which they held a press conference outside of the jail.

In conversations with the Yated, Rabbi Zwiebel, Rabbi Lerner and Rabbi Hecht all expressed the profound feeling of chizuk that they felt Reb Sholom had received from the visit. Most amazing was that they all expressed a feeling of chizuk that they themselves got from undertaking the trip, speaking with Mr. Rubashkin and davening with him. “This was the primary purpose for which we undertook the trip,” said Rabbi Lerner. “To give chizuk to Reb Sholom.”

The second purpose of the trip was to express concern over the reason for which the magistrate refused bail for Mr. Rubashkin. Mr. Rubashkin is being forced to sit in prison because he has been deemed a “flight risk” as a result of the Israeli “Law of Return” that grants automatic citizenship to Jews. This represents a precedent that could conceivably be used in the future to deny bail to any Jew.

The third purpose of the trip was to express their collective feeling that Sholom Rubashkin does not represent a flight risk, and declare their trust in Mr. Rubashkin by publicly putting the reputation and credibility of each of their organizations on the line. “Sholom is well aware of how many people have advocated on his behalf, and a betrayal of their confidence would cause irrevocable damage to himself, his family, his community, and the many honorable individuals who have shown their support for him,” said Rabbi Yaakov Wasser.

“We are just seeking fair and equal treatment, from the justice system, for Mr. Rubashkin, no more and no less than anyone who applies for bail. At the same time, we are here to visit Mr. Rubashkin and hopefully give him strength to get through this difficult ordeal. This continued incarceration, while he awaits his day in court, is difficult for him and his family,” said Rabbi Lerner.

The delegation headed out of New York early Monday morning, changed planes in Chicago and finally arrived in snowy, freezing Dubuque, Iowa, where they were joined by some local rabbis. Although each rabbi was originally to be allotted a fifteen-minute slot to visit privately with Reb Sholom, in the end the prison authorities permitted all of the rabbis to visit together and they were thus able to daven Minchah together.

“It was clear,” said Rabbi Hecht, “that Reb Sholom derived tremendous chizuk from the visit. Nevertheless, Reb Sholom told me and the other rabbonim that although he now seems upbeat, there are times when it is extremely difficult. Being separated from his family, his children and especially his autistic child, with whom he has a special relationship, is very hard.”

“In fact, Reb Sholom is not even allowed to meet with his younger children. Even the periodic meetings with his wife are by video conference,” explained Rabbi Hecht. “The only Jews with access to him are clergy. Yes, his religious needs, seforim and kosher food are provided for, but Sholom Rubashkin belongs at home with his family until he has his day in court.”

Rabbi Zwiebel related that davening Minchah in the jail was something that he was sure none of the rabbonim will ever forget. “It was an extremely moving experience; an experience that simply can’t be put into words… seeing Reb Sholom, nobly serving as chazzan in orange prison clothing… experiencing the heartfelt tefillos of all who were present…”

Indeed, at the press conference following the visit, the rabbis declared “that not only is Sholom Rubashkin not a flight risk, but he wants the opportunity to face his accusers. He wants his day in court to prove his innocence in face of the serious charges leveled against him. The rabbis also argued “that not only would Rubashkin dishonor himself by fleeing, he would dishonor all of the rabbis and organizations who have supported him.”
Since his detention, they said, dozens of Jewish Iowans have offered their homes as collateral for bail, totaling $2 million, as has a Brooklyn man whose home is valued at $4 million. The court has also received nearly 300 letters testifying to Sholom’s character. Nevertheless, the government continues to insist that he be confined to prison.

The rabbis explained that the imprisonment is unnecessary, excessive and discriminatory against all Jewish Americans. They were highly critical of the U.S. Attorney’s office, which has taken the extraordinary step of classifying Mr. Rubashkin as a flight risk because of his Jewish heritage, arguing that the “Law of Return” would enable him to flee to Israel. During the press conference, Sholom Rubashkin’s attorney, Guy Cook, said that “According to the way the Law of Return has been applied to Mr. Rubashkin, Attorney General Michael Mukassey or Secretary of Homeland Security Michael Chertoff would present the same flight risk if indicted for a crime.”

Indeed, in a letter to Attorney General Michael Mukkasey, Rabbi Zwiebel wrote: “It is ironic that the very law of return that was designed to save Jews from oppression was now being used by the American government to treat Jews as second class citizens by deeming them as flight risks. The implications of this ruling are painfully ironic. The State of Israel, shortly after its founding, enacted the Law of Return to assure Jews in countries where they are treated as second-class citizens that they had a home in the Jewish State. Now, under the logic of Magistrate ruling – and the federal prosecutors who advanced the argument – the very fact that the Law of Return exists is basis for treating an American Jewish defendant as a second-class citizen, keeping him confined in pretrial detention under circumstances where non-Jews might well be released pending trial. The implications of this ruling are also breathtakingly staggering. The notion that Israel’s Law of Return makes Jewish defendants greater flight risks than their non-Jewish counterparts could result in wholesale denials of bail to Jewish defendants who would otherwise be eligible for release pending trial merely on the basis of their religious identity. Needless to say, this ruling is both deeply offensive and extremely troubling.”

Steve Savitsky, Orthodox Union President, also wrote a letter to the Attorney General expressing his concern over the troubling use of the law of return as reason to deny bail.
On the way home, the delegation ran into a snowstorm that severely delayed them. At one point it looked as if they would have to spend the night in Chicago. Rabbi Hecht related: “I and the other rabbonim were not very pleased about the prospect of having to spend a night away from our homes and our families. Then, I thought to myself, maybe Hashem is sending us a message. We were disappointed about having to spend one unexpected night away from our own beloved mishpochos. Imagine how Reb Sholom feels – being held, all alone in the Dubuque prison, without bail, for dubious reasons. This is a lesson from Above to all of us, to think about Reb Sholom’s predicament, to gain a sense of imo anochi b’tzarah – I am with him in his time of difficulty – and do all that we can to obtain his release. We must daven and daven. We must petition the proper authorities to release Reb Sholom Mordechai Rubashkin from prison and permit him, as an American citizen, to have his day in court to prove his innocence.”

The Yated has set up a fund to help pay Sholom Mordechai’s legal bills. Please contribute to help him get the legal representation he is entitled to by sending a check to Pidyon Shvuyim Fund, 53 Olympia Lane, Monsey NY 10952.

The above article and many others appear in this weeks Yaten Ne’eman.