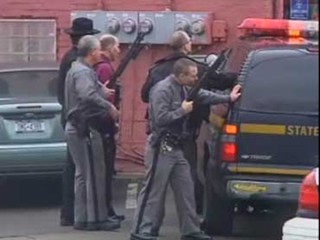 Members of Binghamton, N.Y.’s tight-knit Jewish community were in shock over the weekend after the death of Roberta “Bobbie” King, a 72-year-old substitute teacher who was one of 13 killed when a lone gunman opened fire on the downtown American Civic Association.

According to police and local media reports, King was teaching English to a class of adult immigrants Friday when a distraught 42-year-old former Vietnamese national burst into her classroom, spraying its occupants with gunfire. The gunman, Jiverly Wong, then reportedly turned a gun on himself.

Among the friends, family and acquaintances who were struggling with the knowledge of King’s horrific death were the directors of Chabad-Lubavitch of Binghamton.

“Binghamton has always been a wonderfully warm, wholesome, quiet place to raise children,” said Rabbi Aaron Slonim, who arrived in 1985 and serves as the executive director of the Chabad House. “This event comes as an absolute shock and rips at the fabric of life as we know it.

“My heart goes out to the families of all the victims of this tragedy and to the King family in particular,” he continued. “Mrs. King was a woman of kindness who passed from this world engaged in what she did best: helping others to better their lives. She did so with a gentleness, respect and humor that will always be cherished and never forgotten.”

A mother of 10 children and a grandmother to 17, King was, according to an obituary in the Binghamton Press & Sun-Bulletin, a history and architecture buff who also collected dolls and was a talented cook. Interviews with those who knew her painted a picture of a devoted friend.

“I believe that ‘Bobbie’ had more genuine friends than anybody I know,” Brenda Margolis, who knew King for more than 30 years, told the newspaper. “She impacted a lot of lives because of her very warm, very upbeat, kind disposition and her many interests. Everyone loved her.”

A particular love of King’s was teaching, which saw her lead classes on a substitute basis at area public schools.

“She was an amazing lady,” said her son-in-law, Dr. Todd Lerner. “She was always busy with something.”

Rivkah Slonim, education director at the Chabad House, said that her first connection to King came at a Hadassah dinner shortly after her 1985 arrival to the town.

” ‘Bobbie,’ who had prepared the delicious dinner for 200 women, also chaired the event in her inimitably vibrant style,” said Slonim. “Although we did not meet until later, I always felt that her humor and infectious good cheer were a perfect welcome.

“When the woman sitting next to me whispered that she was the mother of 10 children,” she added, “I immediately accorded her hero status.”