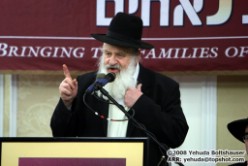 Jerusalem, Israel – In a bold initiative to rescue Israeli women drawn into marriages with Arab men that have horrifying consequences, the Eternal Jewish Family International (EJFI) has partnered with Lev L’Achim in a dramatic effort to rescue many of these women. For decades, Israeli women of both Orthodox and secular backgrounds have been lured into relationships with Arab men only to find themselves mistreated and abused. The Lev L’Achim organization has become a key force in their rescue. Lev L’Achim has set up a hotline for family members and friends of the victims and frequently for the victims themselves. “Our hotline is published in newspapers, mentioned in lectures throughout the city, and advertised on pay phones, even in Arab villages when possible,” says an active leader in Lev L’Achim. “We’re trying to reach every woman that needs our help to let her know that she doesn’t have to handle her situation alone.” With EJFI’s involvement, Rabbi Mordechai Neugroschel acts as staff advisor and counsels women involved in interfaith relationships.  Horrific stories of their abuse make the headlines, but are sometimes not enough to prevent these women from allowing their relationships to progress.

Once a woman is already trapped in an Arab village and realizes that she’s made a grave mistake, Lev L’Achim makes every effort to intercede. There have been many instances where women ask to be rescued from their plight, but the effort is blocked by the Arab husbands. Lev L’Achim volunteers have posed as customers at abusive husband’s salons and other places of work to prevent their return while other volunteers pack the house and take the women to safety.

The Eternal Jewish Family International has worked with Lev L’Achim to assure that these efforts meet with success. It has provided the organization with a variety of resources to assure that their bold and dramatic initiatives achieve the organization’s mission. EJF is dedicated to preserving the sanctity of Jewish families across the globe. It has supported the efforts of various kiruv organizations around the world in an effort to encourage Jewish youth to marry within the faith. Rabbi Leib Tropper, founder of EJFI and chairman of its rabbinic committee calls the Lev L’Achim/EJFI initiative “heroic and historic.” He added: “In hearing some of the personal stories of the women, it becomes a question of hatzolas nefoshos of the highest order.” He said that EJF continues to seek out new ways to assist Jews to reconnect with Torah Judaism and to rediscover the beauty of “our ancient Torah and heritage.”